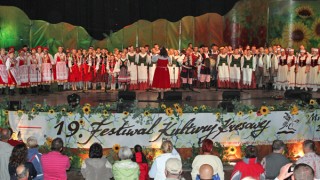 Every year since 1995, organized in Mrągowo at Festival of Culture of Borderland already for the 20th time will host Polish folk bands, choirs and bands and individual artists artistic movement from Lithuania, Belarus, Ukraine, Latvia and the Czech Republic. During this year’s jubilee edition of the festival will represent Lithuania: Children and Youth Dance Ensemble “Sto usmiechow”, the vocal group of the Song and Dance Ensemble “Wilenka” Folk Dance Group “Zgoda” and the Vilnius band and the Podwileńska band. Festival of Culture of Borderland will be held from 8th to 10th August. Festival of Culture of Borderland was initiated by Ryszard Soroka, who in 1988 founded the Society of Friends of the Vilnius Land and Vilnius Land in Mragowo. To participation in the first festival he invited soloists and bands, dance groups and choirs. The aim of the project was and is to nurture Polish cultural traditions, to popularize the artistic achievements of teams frontiersmen, teams and organizations, to help the Poles in the Borderlands in nurturing and continuation of Polish culture, to facilitate meetings of artists and entertainers, and to exchange of experience.

Every year, along with the presentation of scenic forms are organized open-air stage arts, shows, fairs, exhibitions and tastings will be held again this year. The main accent of 20th Festival of Culture of Borderland will be Gala Concert at the amphitheater in Mragowo on Saturday, August 9th. It will be hosted by  storytellers Wincuk and Aunt Franukowa – Dominik Kuziniewicz and Anna Adamowicz. At the stage in Mragowo will perform both teams of children, youth and older people formed by the people coming from Eastern Borderlands.

Vocal Group Song and Dance Ensemble “Wilenka” operates at the Wladyslaw Syrokomli High School in Vilnius. The team brings together more than 130 children and adolescents at age from 4 to 30 years. The ensemble performs traditional repertoire (folklore of Polish and Vilnius regions) and stage pictures. Team director is Janina Łabul.

Folk Dance Ensemble “Zgoda” began its artistic career in 1988. The majority of the ensemble are children – students of Secondary School in Rudamina. Its founder, director and choreographer is Henryk Kasperowicz.

The organizers of the jubilee edition of the festival are: Mayor of Mrągowo – Otolia Siemieniec, Society of Friends of the Vilnius Land and Vilnius in Mragowo, Centre of Culture and Tourism in Mragowo. The project is co-financed from the funds received from the Ministry of Foreign Affairs in the competition for the task “Cooperation with Polonia and Poles abroad in 2014.”

Renovations of schools and kindergartens in the region of Vilnius