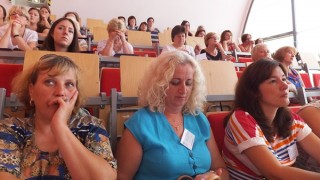 Teachers and headmasters of the Polish schools within the Soleczniki region have participated in yet another meeting constituting a part of specialised workshops entitled ”Teacher- a Guide to Polishness”. The whole project is relised by the Oder-Niemen Association and the Soleczniki Region Local Government in cooperation with the Teachers’ Improvement Centre in Wrocław, Ignatianum Academy in Cracow and the Menos Psychological Study in Gdańsk. Thanks to this initiative, the pedagogues are enabled to partake in schoolings, workshops and conferences, held both in the city of Soleczniki and numerous Polish cities.

In May, in the Jan Śniadecki Junior High School in Soleczniki, schoolings for the administrative and teaching personnel were held in order to acquaint the participants with innovative techniques of stress management.

The next stage of the project included a study trip of science teachers to Warsaw, to the Copernicus Scientific Centre, and for workshops. The social sciences  teachers, on the other hand, partook in a conference entitled ”Changes in Polish Culture and Polish language between 20th and 21st century”, held in the Ignatianum Academy in Cracow.

The scientists of the Ignatianum Academy had tracts on the post-1989 changes from a historical perspective, on words forgotten, on the verge of extinction and changing their meanings as well as on the new linguistic savoir vivre, language of the young generation of Poles, and the impact of new media on the contemporary’s literature language and structure. A member of the Polish-Lithuanian Commission for Textbooks, Aleksander Srebrakowski Ph.D. of  the Wrocław University was talking about the depiction of history in Polish and Lithuanian textbooks. At the end of the conference, a discussion took place.

The Oder-Niemen Association organised a trip for all the participants enabled to see Cracow and its most interesting sites.

In September, another meeting ”Teacher- a Guide to Polishness” will be held. It will be based upon methodical schoolings led by the councillors of the  Teachers’ Improvement Centre in Wrocław. The project is planned to close with a methodical conference.

Summer School of Art in Soleczniki