A qualitative leap or discrimination? Songaila is the new Director of Press, Radio and Television Support Fund 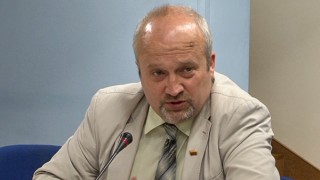 Gintaras Songaila, who is known for anti-Polish sentiment, has become the new Director of Press, Radio and Television Support Fund (Fundusz Wspierania Prasy, Radia i Telewizji). “I hope that he will approach his new responsibilities in a rational manner and his political views will not affect his activities”, says Robert Mickiewicz in the interview with Wilnoteka.

Gintaras Songaila has won the competition for the Director of the Press, Radio and Television Support Fund. In total there were 5 candidates who had entered the competition.

“I have actively contributed to the establishment, on the basis of the Act on informing society (Ustawa o informowaniu społeczeństwa), fund which supports cultural and educational activities of media “, points out the new Director adding that his aim is “a qualitative leap”.

It is hard to say what exactly “qualitative leap” means for the media of national minorities which benefit from the fund, even if only to a small degree. The new director known for anti-Polish sentiment, among other things, strongly opposes the original spelling of surnames.

“I hope that Songaila will approach his new responsibilities in a rational manner and his political views will not affect his activities”, says Robert Mickiewicz in the interview with Wilnoteka. He adds that the Fund is a Sate institution. It has been established for every type of the media, including the media of national minorities. Mickiewicz is the Chair of the Polish Media in Lithuania Association (Stowarzyszenie Polskich Mediów na Litwie).

Even today funding allocated for the Polish media in Lithuania from the fund is very limited. The newspaper “Kurier Wileński” and radio “Radio znad Wilii” receive money from the fund. It is worth mentioning that support from the fund has not been awarded for a long time. “For two years we have been cooperating with the fund and I have to admit that our collaboration has been successful. The funding has been gradually increasing and therefore we notice a positive tendency”, says Mickiewicz.

We will soon see whether this positive tendency will be maintained. The new Director of the Fund is most certainly not a fighter for the rights of national minorities . During his political career he has been associated, above all, with far-right political groupings. He has been the Chair of The Lithuanian Nationalist Union (Lietuvos tautininkų sąjunga) since 2005. After the Union’s merger with The Homeland Union (which then called The Homeland Union – Lithuanian Christian Democrats, TS-LKD) he became the leader of the nationalist faction. In the parliamentary election in 2005 he was one of the candidates of the TS-LKD and he became a Deputy to the Seimas. However, during the parliament’s term of office he was expelled from the party. He continued his political career in a nationalist political party reactivated by him. In the election held in 2012 he did not manage to win a parliamentary seat.

Songaili ‘s social activities also reflect strong anti-Polish sentiment. He was one of the organisers of the rally “in defence of Lithuanian language” in front of the Seimas on 30 June 2015. The video posted below aptly illustrates participants’ views:

The government has commissioned analysis of the situation of national minorities