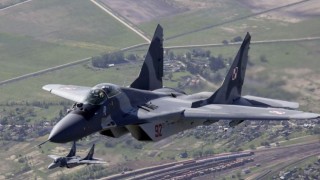 70 years ago on the 13th July 1944, two courageous men: officer cadet Jerzy Jensch AKA Krepdeszyn and corporal Artur Rychter AKA Zan, hung white and red flag atop Piles Kalnas. Although the missiles were still whistling around, the fights for the city were coming to and end. Only the last  groups of Germans were left to defend themselves. After almost a week of a vehement battle, Vilnius was eventually free from its invaders. Unfortunately, the fuscous felons were soon replaced by equally cruel Bolsheviks. Vilnius Operation, though miitary successful, politically proved to be a failure. Both Vilnius and the Vilnius Region found themselves under Soviet rule for many decades and they never were never regained by Poland.

Undertaking the military effort and releasing Vilnius on their own were meant to subvert the Soviet propaganda stating that ”The Home Army soldiers are standing with weapon ready to use”, prove that the Underground military formations were capable of conducting a serious provocative action, and beat the Germans. Also, it was to be a manifestation of the strong-willed people of the Eastern Borderlands willing to constitute a part of Poland. The Home Army authorities were still deluding themselves that the question of borders was not preordained yet. However, the settlements in Tehran were actually over at that time. There, without the presence of any Polish delegates and overtly violating the Eastern Borderlanders’ will, the Anglosaxons agreed to give Stalin almost 50 percent of the territory of Poland.

The first Home Army’s attacks failed under the pressure of German machine guns and cannons. After several hours of fighting, in the afternoon on the 7th July 1944, the 1st Red Army units arrived near Vilnius and subsequently, together with the Home Army soldiers, they joined in. The battle, ending with displacing the Germans lasted for six days and nights. Its final elements were the bloody battle near Krawczuny, with the 1st Vilnius  Brigade of the Home Army fighting, and the very conflicts near the Cathedral Square and Piles Kalnas. The symbolic ending was indicated by the white and red flag hung at the tower of the former Giedymin  castle’s ruins. This flag was though soon ripped off by the Red Army soldiers. Such a sign undeniably clarified both the intentions of the Soviets and the future  fate of the Home Army soldiers and Polish citizens constituting the majority of the city’s inhabitants at that time.

70 years passed since the ”Gate of Dawn” operation AKA the Vilnius Uprising. In Vilnius, these events have not been forgotten. With the participation of guests from Macierz, ZPL representatives, scouts and the Vilnius youth, the anniversary of the battle for the town has been celebrated, so I decided to go there an pay homage to the deceased. Touching celebrations and even more so- talking to the Home Army veterans. Among them, I met an aquaintance of mine I have not seen for a long time, lieutenant colonel Tadeusz Bieńkiewicz AKA Rączy. An incredible figure he is. He actually started his conspirational activities with the arrival of the 1st Soviet soldiers. Awarded with a Virtuti Militari Order, he was one of the bravest soldiers of a notorious military chief Jan Borysewicz AKA Krysia. Moreover, he also partook in the most bodacious  Home Army’s operations at the Navahrudak Region.

After July 1944, he did not lay down his arms but instead, decided to pursue the battle against Bolsheviks. After crossing the Curzon line in 1950 he was arrested and sentenced for life. A human legend. Hard as steel. Not the only representative of the Lidzkie territory. From Belarus, came group of home army soldiers and very affable young people, who not only well retain their Polish identity in the difficult post-Soviet reality of the Łukaszenko’s country but also, cultivate the memory of their great-grandfathers, who were once the Home Army soldiers.

Abstaining from the detailed recollection, I would like to emphasise only one moment, which is particularly memorable for me. On the 6th July sharp at noon on the Vilnius Rossa, the celebratory placing of wreaths at the Mother and Son Tomb- Józef Piłsudski. All of a sudden, there was a noise over our heads and we could soon see two Polish MIG-29 aircrafts in the sky. So low were they flying that everyone could have noticed white and red chessboards. After a while, the pilots reversed and once more riveted the attention of the people gathered. Have they come to jin the celebrations? To pay homage to the compatriots, who died 70 years ago? Incredible immpression!

As it turned out later, our jump jets of the baltic Air Policing mission have come to Vilnius to enrich the celebrations of the Lithuanian Republic Day(i.e. the king Mendog’s coronation), held few kilometers further- in front of the Lithuanian President’s Palace. Our remarkable pilots,crème de la crème of the Polish Army, have also remembered about the Vilnius Uprising! They have once more proved that our jump jets deserve to be perceived as  the elite of the Armed Forces. Kudos to you,the Noble  Officers!

Greatly impressed by the Polish pilots  incredible act, I have realised that they derive a lot from tradition and, that they are heirs of the Polish squadrons fighting i.a. for the English during the war, when the Polish Air Forces gained the perpetual glory. It also occured to me that they were fighting under the flag of the Gate of Dawn Lady, crocheted by the Vilnius women. In June 1940, through the Japanese Diplomacy in Kaunas it was sent to Vilnius. It was a gift of the Vilnius Poles for the pilots struggling with the Germans. After many years, pilots serving uder this particular flag(Official Flag of the Polish Air Forces!) paid homage to the deceased Vilnius citizens. Can there be found any more symbolic fact during this year’s celebrations of the ”Gate of Dawn” military operation?

The dynamics of the Lithuanian-Polish relations- on the International Conference