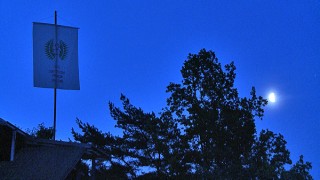 More than 500 people participated in XXVI Touristic Rally of Poles in Lithuania that took place near the picturesque area of Manor House in Amusement Park “Ažuolynė” of Trocki region. In the event and competition took part 8 teams from different corners of  Vilnius region.

For the first time Touristic Rally of Poles in Lithuania was held on private premises and for the first time its participants – both members of a Rally and independent individuals – had to sign up and pay a symbolic fee. The weather was good, people had a nice time and took part in the competition and contests. During the conversations with  “Wilnoteka” many participants said that they can’t imagine the summer without the Rally. Some of them are invariably arriving here with the their families for years.

Teams participating in XXVI Touristic Rally of Poles in Lithuania showed a wide range of ideas during cookery or artistic competitions. The fight for every single score was also intense during sporty or touristic competitions.

In the ultimate tryout won the MJB team from Mickun. Youths from Ławaryszek, Kowalczuk, Kieny and Szumska, teamed up as the Ł3KS, came the second. Third place was won by the Rover Club from Vilnius.

Soon our website will present a video coverage from XXVI Touristic Rally of Poles in Lithuania.

Wandering in the streets of Vilnius: How Mickiewicz ousted Zan