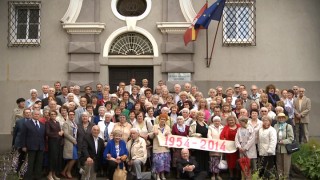 Many years ago the 5th  Vilnius High School graduates of the 1950 age-group established to meet every year, on the last Sunday of June. Despite the absence of their friend, the vice-headmaster of ”Piątka” Zbgniew Rymarczyk, the outstanding ophtalmologist Olgierd Korzeniecki, and few other people, the meetings are still being organised. The younger age-groups of graduates of the school constituting a starting point for the Polish education in post-war Vilnius come here as well. And thre is a book, in which all te memories of the former students, concerned with their school, teachers and friends.

”Always faithful to ”Piątka”. The annals of the 70th anniversary of the Vilnius Joachim Lelewel High School”- it is a history of Vilnius after World War II, the history of a few generations of this city. The memories of the school graduates were gathered by Krystyna Adamowicz, journalist and a former student of ”Piątka”, 1956 age-group.

The book used priceless archival materials gathered by the school’s chronicler Jan Pakalnis, Krystyna Kiliene nee Pylewicz, I rena Woronko. The issue is richly illustrated: in the black and white photos there are charming girls, good-looking boys. Modestly clothed, times being hard then,yet with an amazing glimmer and joy in their eyes. This glimmer has remained in their eyes until today, despite the fact that some of them were sent to prison, on exile, to work camps  or wanderings far away from their home town.

The life of Stanisława Kowalewska- Kociełowicz,  graduate of the 5th  High School, age-group 1950 is a ready-made screen-play: scauting, secret educational groups, fighting in the Home Army, studying Polish in Moscow, being arrested, imprisoned in Butyrki, interrogations on Łubianka, the verdict, Siberia, then returning to Vilnius, love at the first sight, proposal on the same day, and a quick wedding. With her beloved- a soldier of the 3rd  Vilnius Home Army Brigade ” Szczerbiec”, she went on exile to Siberia. ”We spent our honeymoon on a free trip round Siberia”- ironically recalled Mrs. Stanisława. Currently, Mr.  And Mrs. Kociełowicz live in Szczecin. Mrs. Kociełowicz is the president of the World Association of the Home Army Soldiers the Region of Szczecin. Also, she unchangeably states:” In Poland we are only registered, our homeland is Vilnius.”

Stefan Śnieżko,  ”Piątka” graduate, age-group 1954, comes from Ginejciszki near Vilnius. Since mother had  decided her son should learn in a Polish school, he moved to Vilnius. He graduated from school awarded with a silver medal. As a student of the 4th year of the Kaunas Politechnics, he decided to go to Poland. He bacame a lawyer, a ”Solidarność” association activist, and in new Poland between 1990 and 2001 he was a deputy of the Public Prosecutor General, i.a. leading the investigation of the crime in Katyń. After retiring Stefan Śnieżko moved to the Masurian District, because ” it is closer to Vilnius”.

Aniela Tomaszewska- Marszał,  graduate of the 5th  High School, age-group 1957 is the daughter of the legendary Vilnius teacher Eleonora Tomaszewski, a student of prof. Stanisław Pigoń, who led the secret educational groups in Vilnius  during the war. Mrs. Aniela’s father, Mieczysław Tomaszewski was a principal of the Vilnius branch of the ”Sokół” gymnastic association.

Ms. Janina Gieczewski is known to all Polish people in Vilnius. For many years she was the editor of the Editorial Team of Polish Textbooks, the president of the Polish Section of the Vlnius Association of Political Prisoners and Refugees, a person with immense effervescence  and positive spirit proudly presents herself as a ”Piątka” graduate.

2014 is the year of the 70th anniversary of the 5th High School( now J. Lelewel High School in Vilnius). The jubilee will be celebrated in October  but, since it was known that-as usual- the faithful graduates would gather on the last Sunday of June, there was a special celebration wherein Krystyna Abramowicz’s book was presented.

The protagonists of the book ”Always faithful to ”Piątka”.The annals of the 70th anniversary of the Vilnius Joachim Lelewel High School” met at first by the old school building on Antokol, on Piaski.
In the building of the legendary school  there is now a Lithuanian school, but st. Christopher still guards from over the entrance the same as he did man years ago.

Not all that can and must be told about the fate of people joined by the love of Vilnius and ”Piątka” was described in the book issued in the year of the 70th anniversary of the school. The people gathered at the presentation pleaded with the author to continue her work…