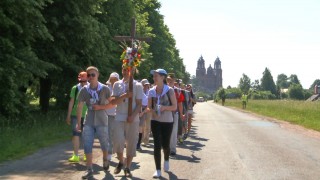 The local government of Vilnius region is the organizer of II Pilgrimage ‘Christ, reign over us always and wherever’ from Turgiele to Miejszagoła. The pilgrimage will take place from 13 to 15th of June 2014. It is dedicated to the 5th anniversary of the announcement of the Act of Enthronization of Jesus Christ by the Committee of the Local Government of Vilnius Region and 3rd anniversary of death of the priest Józef Obrembski. The pilgrimage will also be the act of gratefulness for the canonization of John Paul II.

In the year 2013 the Local Government of Vilnius Region organized the Walking Pilgrimage from Turgiele to Miejszagoła ‘Following the Priest Józef Obrembski’ for the first time. In this way during the 2nd anniversary of death of the legendary clergyman symbolically were combined two cities with which he was connected. In Turgiele he was working being a young priest, after getting holy orders in the year 1932. In 1950 he was transferred to Miejszagoła where he spent the rest of his life. The Priest Józef Obrembski died on the 7th of July 2011 being 105 years old.

This year the Local Government of Vilnius Region has also decided to invite school youth, tutors, teachers, and volunteers for the pilgrimage from Turgiele to Miejszagoła. The run of the pilgrimage drives through The Divine Mercy Shrine in Vilnius, and Suderwa.

As it was written down by organizers, during the pilgrimage there will also be initiated common prayers, conferences, Lord’s Words considerations. It will be a possibility to deepen the knowledge about the value of Christian family, Divine Mercy, the importance of the Christ King Enthronization Act proclaimed in the Vilnius region.

Bumblauskas: We are afraid of Poland and neglect Belarus

Grybauskaitė: The issue of bilingual street signs is delicate in the Russian context