Lithuanian Prime Minister: There is no betrayal in the act of implementation of the original non-Lithuanian names 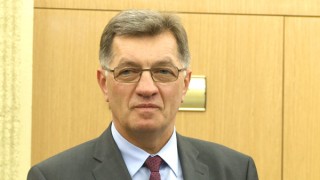 The Prime Minister Algirdas Butkevičius assured the public opinion that he supports the implementation of spelling non-Lithuanian names in their original form. Although during the last cabinet meeting in Spring the Parliament has withdrawn from discussing the appropriate bill, the head of government stated that this matter must be settled.

„It has to be done considering the people who came here from abroad and now live in Lithuania, and also considering our citizens who go abroad. For example the girls, women, who marry the foreigners, have children with them and then have various legal problems in the country” – said Algirdas Butkevičius for the Žinių radijas radio. „This issue has to be considered from a different perspective: we are living in a global world and there is no betrayal in it [in the act of implementation of the original spelling of non-Lithuanian names – editor’s note] – added the head of the government.

Last week the issue of how to spell the non-Lithuanian names was introduced to the Seimas’ deliberation twice, and on request of the opposition it was rejected both times. The project was to be accepted during the last Spring session, on 30th June. The ruling coalition has even decided to take a political decision in this matter.

Eventually, the project was not discussed. The chairperson of the Parliament, Loreta Graužinienė informed that the discussion of the project was postponed to the Autumn parliamentary session „to be able to take under cosideration opinions of every political party and make the right decision”. Unofficially it was said that discussion about the spelling of non-Lithuanian names was delayed because of the visit of the Polish President, Bronisław Komorowski that took place later that day: the President, who is about to end his tenure, was awarded the title of Doctor Honoris Causa from the University under the name of Witold the Great. According to some politicians, discussing the matter on the day of the President’s visit may be taken as pressuring the Lithuanian politicians because it is a sore point for both sides.

The issue of how to spell the non-Lithuanian names is one of the sore points in Polish-Lithuanian relations. Polish citizens living in Lithuania have demanded the right to use their names in the original form for years. The Lithuanian national and nationalistic environments strongly oppose the idea. „The defenders of the Lithuanian language” have organised more than one protest already. The most recent one took place in front of the Seimas building the day when the Parliament was to accept the bill of non-Lithuanian names spelling.

Matura Exam results: in Polish schools things are much worse than in the Lithuanian ones