Matura Exam results: in Polish schools things are much worse than in the Lithuanian ones 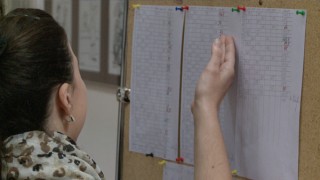 This year’s high school graduates waited extremely long for the results of their finals. Lithuanian language exam took place on 1st June, but its results were not announced until 2nd July by the National Examination Centre. On the same day they also announced the results from the mathematics, biology and geography exams. The results of this year’s Matura Exam stack up much better than those from 2014. State examination in mathematics was passed by 90.72 percent of high school graduates, biology – 95.7 percent and geography – 97.9 percent of them. In the national minorities’ schools exam results from Lithuanian language are noticeably worse.

The most import Matura Exam in Lithuania is the exam in the language, Lithuanian in this case. It is the only one mandatory exam, without which one cannot obtain the final diploma. The high school graduates can choose from the levels of this exam: scholastic or national. During the tertiary education admissions, the mark from the state exam is required in Lithuania. This year’s graduates from the schools of national minorities, including the Polish schools in Lithuania, are the third grade who passed the Lithuanian exam on the same basis as the students from the Lithuanian schools. The exam has been normalised under the Education Act from 17th March 2011 – against the specialists’ opinion, irrespective of the school societies protests and over 60 000 signs.

The results from the Lithuanian exam were announced on 15th July.

Each school graduate can check their results on the website of the National Examination Centre rezultatai.nec.lt by typing the code assigned to them. Exam results can be appealed within three days can by submitting a letter of appeal to the school management.

on the grounds of: egzaminai.lt, BNS