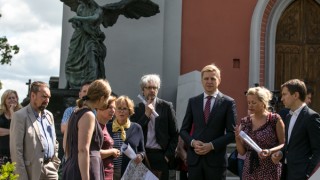 New city authorities have announced that Rasos Cemetery will be thoroughly renovated. After visiting the necropolis Remigijus Šimašius, the mayor of Vilnius, promised that in a few years’ time it will look quite differently. Lanes will be neaten up, scarps will be supported and strengthened and chapels will be renovated. The project will be partly financed from city’s budget but the authorities hope that the majority of money will be obtained from European funds.

For over 20 years, the Social Committee for the Care of Old Rasos (“Społeczny Komitet Opieki nad Starą Rossą”) strived to draw attention of city authorities and landmark preservation specialists to the condition of the cemetery. That histroic necropolis is situated on scarps and among trees. Subsiding scarps have been destroying historic gravestones. Every year the Committee organises fundraising for Rasos Cemetery in various Polish cities. Many collected during those events were used to renovate individual gravestones but the whole cemetery requires renovation.

During the previous City Council term, city authorities had prepared project, which aimed to stop scarps erosion, tidy up lanes, cut out old and diseased trees and renovate monuments. Current city authorities have been familiarizing with the plan.

In the morning on Thursday, the mayor of Vilnius Remigijus Šimašius strolled through Rasos Cemetery accompanied by other representatives of city authorities and landmark preservation specialists. According to the mayor, the place is, as much as it is possible, kept in a good condition and bushes are grubbed out but the thorough renovation works are required. He assured that the city will undertake the task. “It is in city authorities’ plans. Rasos cemetery will change in a few years’ time. It still will be an old cemetery but neaten up. It will be safe to walk there, scarps slides will be prevented and the most important gravestones and chapels will be renovated. We hope that a substantial part of the renovation cost will be financed from European funds and the rest will be obtained from a city budget and from Lithuanian government. The total cost of the project will reach around €3 million”, says Remigijus Šimašius. He added that the renovation of Rasos Cemetery should end in 2018.

It is an open-air museum, where one can get to know the history of Vilnius and Lithuania. Rasos Cemetery was established in 1801. It consists of several parts: Old Cemetery (“Stara Rossa”), New Cemetery (“Nowa Rossa”), war cemetery (“Cmentarz Wojskowy”) and mausoleum of a mother and the heart of her son (“Mauzoleum Matki i Serca Syna”). In an area of nearly 11 hectares there are around 26 000 of gravestones, monuments and tombs. Many notable persons were buried there such as professors of the Vilnius University, Eustachy Tyszkiewicz (an archaeologist and a writer), Antoni Wiwulski (a sculptor and an architect), Franciszek Gucewicz and Franciszk Smuglewicz (painters) and the two children of Stanisława Moniuszko (a composer). There are also burried Jonas Basanavičius (a father of Lithuanian national revival), Mikalojus Konstantinas Čiurlionis (a painter and a composer) Vincas Mykolaitis-Putinas, Balys Sruoga, Petras Cvirka (writers) and many more important persons for Poland, Lithuania and Vilnius.

Are Polish institutions saved? Schools have two years to acquire the status of junior high school

Lithuanian Prime Minister: There is no betrayal in the act of implementation of the original non-Lithuanian names