Are Polish institutions saved? Schools have two years to acquire the status of junior high school 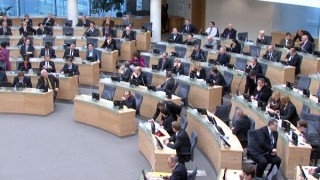 The boardroom of the Lithuanian Parliament, phot. wilnoteka.lt

Schools which did not manage with the accreditation of secondary education program have yet 2 years to perform it. The Parliament has accepted the amendment to the article 41 of the Law on Education, by virtue of which the final date of enforcing the new system of education is postponed by two years, i.e. till 1 September 2017.

According with the Law on Education, from the 1st September 2015, secondary schools should disappear. Instead, they ought to be substituted by junior high schools or elementary schools. However, owing to various reasons, not all schools managed to pass the accreditation process. This problem concerned both the schools of minorities and the Lithuanian schools. The majority of the schools are in Vilnius but also in the Širvintos District Municipality, in Kovno – about 20 institutions in all.

In spring 2015, the project of amendments to the Law on Education was proposed. In the first version, it was proposed to postpone the date of transfer to the new system by three years, to the 2018. Finally, though, the term was prolonged by two years.  The decision was made on the last meeting of the Parliament in the spring session. There were 78 MPs voting yes, 4 – no, 8 did not take stand.

MP Irena Šiaulienė (Social Democratic Party of Lithuania), who is one of the authors of the project, said to Wilnoteka that the accepted amendments do not introduce any changes in the education system. Schools that missed to go through the accreditation process were offered the status of junior high school. As she provided, the final decision concerning the status of each individual school is in the competence of the municipality, where the institution is.

Waldemar Tomaszewski, the leader of Electoral Action of Poles in Lithuania and deputy to the European Parliament said to Wilnoteka that this is the vital decision; its acceptance was preceded by months of efforts, talks and discussions.