Fate of schools in the hands of municipalities 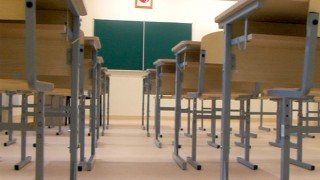 Before the end of the school year, municipalities must decide on the issue of reorganization of schools, choosing which schools will become primary schools, and which will still be able to implement high school curriculum. During today’s meeting, Vilnius City Municipality Council decided that starting September 1st A. Mickiewicz Secondary School will not have form 5. Decisions about reorganizing two Polish and two Lithuanian schools in Dieveniškės and Baltoji Vokė will be made by the Šalčininkai District Municipality Council in the next month.

Vilnius ‘Mickiewicz’ obtained the status of secondary school over 15 years ago, as one of the first Polish schools. According to the Law on Education, as a secondary school it cannot have forms 5. Until now though, by decision of the capital’s Council, forms 5 were formed.

Vilnius City Municipality Council decided that starting September 1st A. Mickiewicz Secondary School will no longer be able to assemble forms 5. As reasoned by Gintras Petronis, Director of the Department of Education, Culture and Sport in the capital’s municipality, students form Polish schools will be able to go to the nearby Sz. Konarski High School, that starting from the new school year, will be turned into a primary school.

Gintras Petronis also informed that on Wednesday April 29th, schools applying for the status of so called ‘long secondary school’, J.Lelewel and Wł. Syrkomla schools, were visited by the commission form the Ministry of Education and Science of Lithuania, which will decide whether these school may pursue accreditation. J. Lelewel High School wants to implement a specialised curriculum with an engineering profile, while ‘Syrkomla’ – curriculum based on Christian values.

Reorganization of schools was also discussed during the Wednesday meeting of the Šalčininkai District Municipality Council. In the Šalčininkai District, due to insufficient number of students some schools did not meet the requirements of accreditation for high school curriculum and could not apply for the status of secondary school. The Municipality came up with a different solution: transforming these schools into primary schools and create branches of nearby secondary schools under the same roof. In practice, it means that children studying in forms 1-10 in the Polish school in Dieveniškės, starting from the new school year will be students of A. Mickiewicz Primary School, and the students of forms 11-12 – of J. Śniadecki Secondary School in Šalčininkai. Secondary school forms will still learn in the same building, under the same teachers. Students of Dieveniškės based Lithuanian school ‘Ryto’ will be taking final high school exams as students of Lithuanian S. Rapalionisa Secondary School in Eišiškės. Students of forms 11-12 of Polish E. Orzeszkowa in Baltoji Vokė, without going to Jašiūnai will graduate M. Baliński Secondary School in Jašiūnai, and the students of Lithuanian school ‘Šilo’ in Baltoji Vokė – Lithuanian Secondary School ’Aušros’ in Jašiūnai.

The Šalčininkai Council did not yet make the decision regarding these schools. The government representative to the Vilnius County Audrius Skaitys had procedural objections against the prepared drafts of resolutions. The issue of planned reorganization was also publicised by the Lithuanian media. Although, only in the context of the Lithuanian school ‘Ryto’ in Dieveniškės. Dieveniškės are considered a ‘Lithuanian nook’ in the Polish Šalčininkai District.

Decision regarding reorganization of school the Šalčininkai councilmen will make during the next meeting, probably at the end of May.

“You are the ambassadors of the new agreement”. A reunion for former trainees of the International Parliament Traineeships Programme