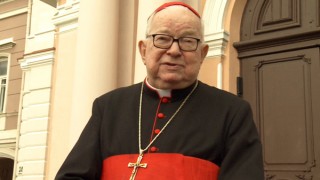 The Vilnius District Municipality Council bestowed the title of the Honorary Citizen of Vilnius District to the Vilnius region born Cardinal Henryk Gulbinowicz. 26 councilmen in a 31 person Council voted in favor of the appropriate act, one withheld his vote.

The title of the Honorary Citizen of Vilnius District was bestowed to Cardinal Henryk Gulbinowicz in recognition of his achievements for the Vilnius region. He was born and raised here, here he spent his youth. As a member of the Vatican’s Congregation for the Oriental Churches he helped Lithuania. It was mainly material help, printing of religious literature, as well as help in preserving cultural and religious heritage. He supported parishes of the Vilnius region, he offered his patronage to youth initiatives.

Cardinal Henryk Gulbinowicz was recommended to the municipality for the title of the Honorary Citizen of Vilnius District by communities of Zujūnų and Nemenčinė.

Cardinal Henryk Gulbinowicz was born on 17 October 1923, in Šukiškės village, in Vilnius archdiocese. He attended primary school in Vilnius. Also in Vilnius he graduated secondary school and got his high school diploma. In 1944 he began his philosophical and theological studies at the Vilnius Diocesan Seminary, which was moved in 1945 to Białystok, where on 18 June 1950 he was ordained by Archbishop Romuald Jałbrzykowski.

In 1959 at the request of the Bishop of Warmia, Tomasz Wilczyński, he lectured moral theology and ethics at Higher Theological Seminary ‘Hosianum’ in Olsztyn and held various didactic functions including that of a prefect, vice-rector and rector. At the same time he involved himself deeply with pastoral work among local academic youth and research workers in the parish of the Most Sacred Heart of Jesus in Olsztyn. In 1970 he was appointed the apostolic administrator in Białystok, and he received episcopal ordination on 8 February 1970. In 1975 he was named Archbishop of Wrocław, and ten years later he became a Cardinal. Cardinal H. Gulbinowicz acted as Archbishop of Wrocław until 2004, when he reached the retirement age.

He was friends with many prominent figures of the last century. Many of them he met in the Vilnius region. Sister Wanda Boniszewska was his catechist in Pričiūnai, she prepared him for the first Confession and Holy Communion, later on for being an altar server. Priest Michał Sopoćko, with whom he later on worked on Bialystok, he met in Vilnius. At the Catholic University of Lublin his lecturer was Karol Wojtyła – who would go on to become pope John Paul II. During one of his visits to his homeland, Cardinal Henryk Gulbinowicz shared with Wilnoteka his Vilnius memories.

Based on: vrsa.lt, own information

Fate of schools in the hands of municipalities