Mondays on the radio: the memoirs of professor Jerzy Młynarczyk 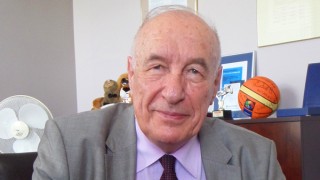 Beginning on the 3rd of November, the stories told by Jerzy Młynarczyk, the professor of law, politician, rector of the University of Business and Administration in Gdynia (Poland) and former basketball player, will be broadcast on LRT Klasika. The memoirs of professor Młynarczyk constitute a continuation of the cycle of reminiscences about Vilnius, aired every Monday.

Born in 1931 in Vilnius, Jerzy Młynarczyk spent his childhood in Podbrodzie (now: Pabradė), where his parents worked as teachers. After the World War II, he graduated from the Faculty of Law at Adam Mickiewicz University in Poznań and intensively trained basketball, representing Poland in many international tournaments. The professor is an expert in admiralty law and international public law. He published 14 books and many scientific articles. He delivered lectures at universities in Sopot, Gdańsk, Warsaw (Poland) and Malmö (Sweden). In 1980s he was the director of Maritime Institute in Gdańsk. Jerzy Młynarczyk was also the member of the Polish United Workers’ Party (PZPR) before the collapse of communism. From 1977 till 1981 he held the position of the president of Gdańsk. He was the deputy of the fourth term (2001-2005) of the Sejm, the lower house of the Polish parliament, as a member of Democratic Left Alliance (SLD).

In the first episode of the professor’s memoirs, there will be addressed such issues as the prewar environment of the left-wing Vilnius activists, the camp for troublesome foreigners in Wojtkuszki near Wiłkomierz (now Ukmergė) and the situation which occured on Krzywa Street while Germans were escaping from Vilnius.

The author of the broadcast: Tadeusz Tomaszewski

Vilnius No. 5 Higschool celebrated 70th anniversary of its existence