Children from the Šalčininkai region had an active summer 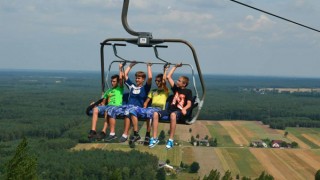 Children from the Šalčininkai region spent the summer break at holiday camps in Poland and Lithuania. They have visited many places and took part in sporting events. Art and music workshops were organised in culture centres in many places in the Šalčininkai region. It is worth noticing that in many cases the children’s parents did not have to pay for those workshops. The holiday attractions were financed by the budget of the Šalčininkai District Municipality Council and partner councils, friendly organisations and institutions.

Thanks to the cooperation of the Šalčininkai District Municipality with other municipalities and non-governmental organisations 427 children from the Šalčininkai region spent a part of the summer break at holiday camps in Poland. It was financed by, among others, Łomża branch of the Association Polish Community, the Foundation Aid to Poles in the East, Warsaw West County, Warsaw City Council, Bełchatów County, Płońsk City Council, Radom County, Kuyavian-Pomeranian branch of Caritas and the Głęboki Bród Forest Management. The last group of children will come back from Łeba in Poland on 30th August, just before the beginning of the new school year.

Children from Lithuania not only visited places in Poland, but also got to know the history and culture of Poland.

Children from the Šalčininkai region took part also in sporting events in Poland. One hundred pupils from Lithuania participated in the 14th Jan Stypuła Polish Diaspora School Olympic Games in Łomża and 40 in the 26th International Parish Olympic Games of Children and Youth in Warsaw. Pupils came back to Lithuania with medals won at both events. Participants of the Parish Olympic Games also spent two weeks in the Tatra Mountains.

Seventy-two pupils took a rest at holiday camps in Lithuania – at the Baltic Sea, in Ignalina, shooting camp in Poszki, in Saint George Centre in Šalčininkėliai and Petrekis dancing camp in Merkinė. Trips to Vilnius, Marijampolė, Merkinė, Trakai, Kernavė, Medininkai and to the Žemaitija were organized for 345 children. Pupils from the Jan Śniadecki Gymnasium in Šalčininkai, the Adam Mickiewicz Secondary School in Dieveniškės and the Paweł Ksawery Brzostowski Secondary School in Turgeliai took part in scouting camps. Camps and trips all over Lithuania were organised and financed by the Šalčininkai District Municipality Council, the Lithuanian Ministry of Science and Education and Caritas Lietuva.

As each year Culture Centre in Šalčininkai organised the Summer School of Art for children and youth. Visual artist from Gdańsk Anna Szpadzińska-Koss worked with children in Šalčininkai, Jašiūnai and Akmenynė.

“Spending time of the summer break actively has also an educational value. I am delighted that each year we have the possibility to offer children a rest in Lithuania and in Poland” – said the Head of the Šalčininkai Municipality Education and Sports Department Regina Markiewicz.