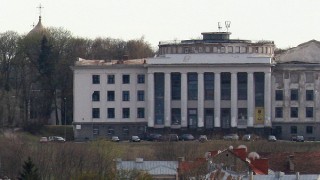 A Polish graphic designer, street art artist and designer Mariusz Waras will stay in Vilnius for the international street art festival “Vilnius Street Art” from 5th to 13th September this year. Within this undertaking the artist from Gdynia will decorate the Palace of Trade Unions on Tauras Hill with his work.

The initial sketch of the mural that will be drawn on the Palace of Trade Unions will be marked by the main theme in the artist’s works, that is the utopian and at the same time real projection of the scenery of the city. Mariusz Waras is attempting to use in his work the columns and the façade of the building.

The Polish artist is mainly known for his project m-city, i.e. murals made on the walls of the buildings in urban space. M-city are most often monochrome visions of agglomerations with high-density housing and standard, anonymous, similar to one another houses that remind one of building blocks for children.

The main theme of the large-format painting of Waras is urban scenery. As the artist claims, his work is “an artistic play with the urban infrastructure”. The artist, while creating paintings on the building and facilities, most often uses a limited range of colours.

Mariusz Waras – born in 1978 in Gdynia. Is a graphic designer, an outside painter, a street art artist and a designer. He has created a couple of hundred of murals within his authorial project m-city. The main theme in his works is urban scenery. His works can be seen in i.a. Warsaw, Gdańsk, Berlin, Paris, New York, Bolzano, London, Prague. His works were awarded numerous prizes in the country and abroad.

The participation of Mariusz Waras in the international festival “Vilnius Street Art” is thanks to the Polish Institute in Vilnius. His works can be seen here.

Children from the Šalčininkai region had an active summer

Residents of Poznań will again take care of the Rasos cemetery