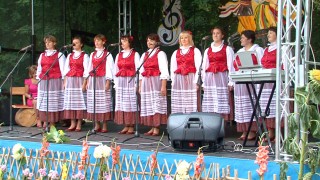 Polish people constitute approximately 10 percent of the Szyrwinty region’s inhabitants. Jawniuny, Borskuny and Miedziuki are claimed to be the most ”Polish” villages. Elementary School in Borskuny is the only one with Polish classes within the entire Szyrwinty region. Since the closure of Polish school in Jawniuny, ”Czerwone Maki” band is almost the only remnant of Polishness in this village. Established in 1989, it performed for the 1st time during Mother’s Day. Currently, it comprises female artists only, their age ranging from 17 to 70. Its manager is still the same, in the person of Stefania Tomaszun. In their repertoire, ”Czerwone Maki” have folk songs written by the inhabitant of Jawniuny, Władysława Orszewska-Kurseviciene.

Songs performed by ”Czerwone Maki” will be heard on Saturday, during 10th  Festival of Polish Culture in the Szyrwinty Region, ”Sing Along”. Despite its being a festival of Polish culture, songs in Lithuanian and Belarussian are going to be performed as well. To celebrate their jubilee, the band invited the Brass Band from Moniuszko School of Fine Arts in Soleczniki, ”Mejszagolanki” band, ”Moderato” choir from Mejszagoła, ”Troczanie” Singing and Dancing Band, Village Folk Band from Musniki, ”Podwileńska” band, and the singing family of Kasparas. The special guest will be ”Sławianskij Bazar” band from Belarus. In addition to all the attractions, food will also be provided.