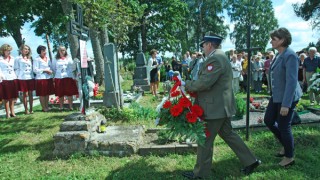 Military parade, airline parade, military festivities and demonstrations of soldier weaponry and military equipment – are the attractions planned on August 15th in Warsaw on the occasion of the Polish Army Day. The Polish Army Day is celebrated on the anniversary of the Battle of Warsaw fought during the Polish-Bolshevik War in 1920. This year marks the 94 anniversary of the decisive battle of the Polish-Bolshevik War, known as the miracle on the Vistula River. Occasional ceremony will be also held in Lithuania: Vilnius, Dūkštos, Zalavas andMedininkai.

Representatives of the Polish Embassy in Vilnius, the Union of Poles in Lithuania and other Polish organizations and institutions operating in Lithuania will pay a tribute to the creator of an independent Poland –  Marshal Jozef Pilsudski on Rasų kapinės. In Dūkštos(Ignalina region) at the Cemetery of Polish Army Soldiers, Holy Mass will take place. On this cemetery lies about 100 soldiers who died during the Polish-Bolshevik war. Their graves – abandoned and neglected – have been renewed by efforts of the Union of Poles in Lithuania and the Council for the Protection of Memory of Combat and Martyrdom. During Friday’s ceremony new gravestones will be consecrated.

On Saturday, August 16, celebrations of the Polish Army Day will be held in Zalavas, in the place, where the family home of Marshal Jozef Pilsudski stood. On the avenue of National Remembrance in Zalavas  frames, commemorating the 100th anniversary of the First Brigade of the Personnel and the 220 ​​anniversary of the Kosciuszko Insurrection, will be revealed.

On Sunday  in Medininkai, the festival “Odyssey of Polish Soldier” will be held. This will be the military-patriotic event: flowers will be placed at the Tomb of the Unknown Polish Soldier of the Polish Army on cemetery in Medininkai., an exhibition of arms of Army will take place and tasting of porridge from a field kitchen. Among the performers is the Polish rapper Tadek with his band “Firma”.

The artistic setting for the ceremonies in Dūkštos, Zalavas, as well as in Medininkai  is prepared by Polish Theatre Studio in Vilnius. “We have a program consisting of patriotic songs and poetry. In Medininkai  we will show the spectacle that we have prepared on the occasion of the 70th anniversary of Operation of Polish Army – Gates of Dawn. Texts for this performance we chose from the book” The Tempest, “in which were collected poems, songs written and performed during war by the Home Army, the participants of the operation Gates of Dawn. We also used the well-known war songs and contemporary works of the Cracow poet and singer Pawel Orkisz “- said head of Polish Theatre Studio in Vilnius Lilija Kiejzik.

In the interview with “Wilnoteka” Lilija Kiejzik said that modern youth – even though it is accused of lack of patriotism – is full of patriotism and able to make sacrifices. “Ten years ago, on the 60th anniversary of our theater, we were preparing patriotic performance. Ten years passed, a new generation of youth came to the studio. When we decided to return to the same program on the occasion of the 70th anniversary of Operation Gates of Dawn, I had some concerns, after all we had to do this show for people who have gone through so much. I did not want to impose patriotism on the youth, patriotism is seeded at home. I started by suggesting them a discussion on: What is a homeland? First there was silence, then they began to say that a homeland is a mother, a family … So I asked them to play in the show as if they were talking to those people, who have gone through so much, and their loved ones are no longer here, and as if they were talking to their closest ones – to their parents, grandparents. Then I saw the emotion in the room. I was also moved looking at the youth: it is the same as that from ten years ago, as that of the war. They might have different views, but the feelings are they the same, they are touched in the same way”- said Lilija Kiejzik.