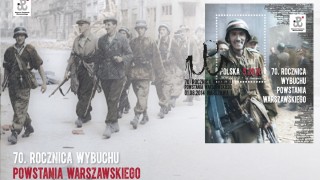 On the occasion of the 70th anniversary of the Warsaw Uprising Polish Post issued a stamp depicting prof. Witold Kieżun on the day of conquering church of the Holy Cross and the police station at the Krakow suburb by insurgents. Anniversary stamp was designed by the artist Agnieszka Sancewicz and will come into circulation on 1st August 2014. Along with a stamp, the collector edition of the first FDC envelope will be released and dater used in the post office No. 1 in Warsaw.
The commemorative stamp features a still from the film shot on August 23, 1944 “On the second day of the uprising I personally took 14 SS men prisoners and a major resource of arms. The branch headed by me won the” Księżówka “- building by the church of St. Holy Cross – and  was the first to burst to the Police Headquarters building, earning a lot of weapons “- says Witold Kieżun, nickname “wypad”, now 92-year-old professor of economics.

Prof. Witold Kieżun comes from Vilnius, he was born on February 6th, 1922 into a family of doctors. In 1931 he moved to Warsaw. In 1939 he graduated. During the war he studied at the Faculty of Law at the secret University of Warsaw, at the same time since October 1939 took part in military activities of the underground. During the Warsaw Uprising he fought in the Special Branch –  Harnas. In August 1944, he was awarded with the Polish Cross of Valour. On September 23th, 1944, the commander of the Army, General Tadeusz Bor-Komorowski personally decorated him with the Order of Military Virtue. After the surrender, Witold Kieżun escaped from German captivity in Ożarów. He went through the prison camps of the NKVD. After the war and studies at the Jagiellonian University in Krakow he took up a career in research. Prof. Witold Kieżun is the author of over 70 books and scientific scripts, approximately 300 articles, papers and chapters in collective monographs in Polish, English, French, Spanish, Russian and Czech, and 2 literary pieces and works of piano music.

The Polish Post, issuing stamp depicting prof. Witold Kieżun as a young insurgent, joined the celebration of the 70th anniversary of the Warsaw Uprising. In addition, the Polish Post is a partner of the movie “City 44” directed by Jan Komasa, which premiered on 30th July 2014 at the National Stadium in Warsaw. “Remembering the heroes of insurgent days,  is the debt we owe to those to whom we owe freedom, as well as an important element of national identity of contemporary Poles” – said the president of the Polish Post Jerzy Jóźkowiak.

Teodor Linkiewicz: „The future of Polish schools depends on parents”