FOTOdialogi in the House of Polish Culture in Vilnius 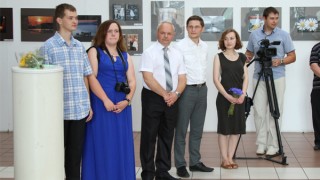 About a hundred photos of twelve authors, mostly from Nemenčinė, but also from Vilnius and few town near Vilnius, and drawings of Genadijusz Fedorowicz and Katarzyna Żemojcin are presented at the ‘FOTOdialogi’ exhibition in the House of Polish Culture in Vilnius. It is the sixth collective exhibition of amateur photographers affiliated in the Association of Photographers of the Ethnographical museum of the Vilnius region in Nemenčinė.

The Association of Photographers of the the Ethnographical museum of the Vilnius region in Nemenčinė was created on 14th November 2012 and associates 14 people. They are mostly young, some of them are school-aged, for example Wiesława Jurgelianec, Daniel Jankowski and Margarita Krikun. The cameraman and editor of “Wilnoteka” Paweł Dąbrowski is also a member of the association. His works are presented at the exhibition in the House of Polish Culture in Vilnius.

The Association of Photographers was created on an initiative of the curator of the Ethnographical museum of the Vilnius region in Nemenčinė Marian Dźwinel. “I’ve worked as a teacher, then as a police officer. Since I have  retired, I can spend more time on photography which is my passion. Reportage photography is what I treasure most, I visit various events with my camera. My favourite topics are nature and people, but not the ‘posed portraits’, rather photos that are ‘picked out’” – said Marian Dźwinel in interview with Wilnoteka.

Marian Dźwinel wanted to create the association for a long time, when he was working in school. Only less than two years ago he managed to realize his idea, as he was working in the museum in Nemenčinė. “I have seen a lot of photos on the Internet on various social network websites and in media taken by citizens of Nemenčinė, therefore I decided to create the association, to organize something jointly” – said Marian Dźwinel.

Works of the association members were presented at exhibitions in the Ethnographical museum of the Vilnius region in Nemenčinė, in City Cultural Centre in Dobre Miasto, in Masurian Museum in Szczytno and in Folk Culture Museum in Węgorzewo.

The exhibition in the House of Polish Culture is open to 6th August 2014.

„At least one day of their holidays was special”. Tour with Filantropia Plus

The Seimas is against bilingual plates