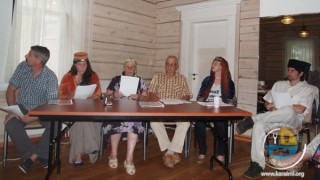 The Summer School of Karaim Language is very relevant to the Karaites, who, due to paying great attention to preserving their heritage and culture, year after year come to Trakai not only from Lithuania but also from Poland and other European countries. Usually, about 80 people from different age groups participate in the classes.

Classes in the 12th Summer School of the Karaim Language have begun on July 7th and will last until July 18th. In 2014, the Karaim people celebrate numerous relevant anniversaries: 110 years ago the 1st secular Karaim book- Szymon Kobecki’s volume of poems ”Jyrlar”(”Poems”) was published and, 85 years ago,the oriental culture researcher prof. Tadeusz Kowalski, had his book ”KaraimischeTexte im Dialekt von Troki” published. At the same time, T. Kowalski’s book is considered one of the most relevant scientific publications devoted to the Karaim people. Furthermore, 2014 is the year of 100th birthday of a renowned turcologist Włodzimierz Zajączkowski and, 90th birthday of another famous turcologist Aleksander Dubiński. Both scientists were born in Trakai. Yet another anniversary to be celebrated this year is the 25th anniversary of  the Lithuanian Community of Karaites activities’ revival.

On July 10 in the Trakai Historical Museum, exhibition ” Karaim Activities and Anniversaries 1904-2014” organised by the Lithuanian Community of Karaites, will be opened. The exhibition presents the pictures from the lives of the Lithuanian Karaites.

The Karaites were brought to Lithuania at the end of 14th century by Vytaytas, the Great Duke of Lithuania. They constituted personal guards of the Duke and his seat- the castle on the Trakai Island.

The Seimas permitted nationality information in the passport. Gift for Tomaszewski