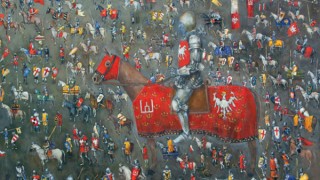 In the Trakai Island Castle (pl. Zamek w Trokach) is held an exhibition ‘Grunwald – Žalgiris – ART’ which presents works which have arisen during annually en plein air [which means ‘ in the open air’ and used to describe the act of painting outdoors-translator] exhibitions of Polish and Lithuanian artists. Both the exhibition and en plein airs are organized thanks to support of the Ministry of Culture of the Republic of Lithuania (pl. Ministerstwo Kultury Litwy) and the Warmia and Mazury Marchal’s Office in Olsztyn (pl. Urzęd Marszałkowskiego Województwa Warmińsko-Mazurskiego w Olsztynie)

The exhibition consists of 28 works of 16 artists from Lithuania and Poland. They were created in 2008-2013 during the international en plein airs ‘Grunwald ART’, taking place in Warmia and Mazury. Participants of those en plein airs create works dedicated to the common Polish-Lithuanian victory in the Battle of Grunwald.

Exhibition of made en plein air works were already held in Olsztyn, Nidzica and also in Brussels, Berlin and Kaliningrad. Thanks to the cooperation with the Centre for Education and Cultural Initiatives in Olsztyn (pl. Centrum Edukacji i Inicjatyw Kulturalnych w Olsztynie) and Trakai History Museum (pl. Muzeum Historyczny w Trokach) the exhibition of paintings displaying fragments of historic battle and its participants was organized in the Trakai Island Castle.

The exhibition ‘Grunwald – Žalgiris – ART’ in the Trakai Island Castle will last till August 31, 2014.

In 2014 falls the 604 anniversary of the Battle of Grunwald which is considered to be one of the greatest battles in history of Medieval Europe.

Delegation of Members: National and Ethnic Minorities Act is a blackmail by AWPL