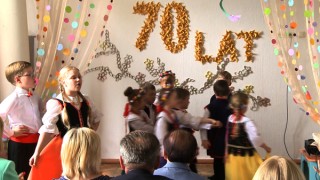 The nursery- kindergarten ” Uśmiech” (” Sypsena”) is celebrating its 70th anniversary this year. 7 years ago, everything indicated the forthcoming closure of the kindergarten. However, due to the  determination  of a group of parents and aid from the people convinced it about its being a worthy cause, the facility has managed to survive. Currenty, ” Uśmiech” is being perfectly developed. It is one of the most popular Polish kindergartens in Vilnius.

The kindergarten situated in a XIX-century minor palace in the P. Visinsko 23 Street on Rossa, was established during World War II in 1944. At that time, it included Russian groups only. The first Polish group was created during the revival era in 1989. The ” Polish” beginnings were by no means easy- due to lack of the learning materials, even Polish books, no programmes or well-trained staff members. On the contrary, now, the kindergarten is exclusively Polish.

There was the time period of  the Uśmiech kindergarten being genuinely beyond its capacity, even the initial classes of the Adam Mickiewicz High School were working then. After some time,though, the Adam Mickiewicz  High School received the status of a junior high school and the kindergarten came into liquidation. Such state of affairs was promptly used by a French private school, which  in 2005  leased one of the floors from the capital local government. In 2006 ” Uśmiech” had to face the threat of liquidation.

Fortunately, there emerged a group of people believing in saving the kindergarten, and the committee for the defence of the kindergarten was established so as to, later, successfully convince the Polish leaders of the Vilnius Local Government  to agree to their decision. Then,  young and effervescent executive, Olga Bonasz came and efficiently shared her zeal with the rest of the team.

Via the means obtained from the Vilnius local government and the ”Community of the Polish People” association, the rooms could eventually be refurbished. ” Aid to the Polish People in the East” foundation funded new playgrounds and equipment. With time, the French school moved to its own headquarters thus enabling the kindegarten to create new groups.

”Uśmiech” has regained the parental trust. Since 2007, the number of children has increased three times. Now, there are 120 children in 6 different groups. The executive, Olga Bielasz is unable to admit all the applying children.

There, not only do children receive professional care but also the possibility of versatile development. The facility works in accordance with such programmes as ” Upbringing with the spirit of values and multicuturalism”, ” Zippy’s Friends”, ” Backpack Library” and ” The whole Lithuania reads its children”. The kindergarten’s employers are, among others, the nuns from the Assembly of Christ the Gracious.

All the important moments of the nursery-kindergarten history were reminded during the 70th anniversary celebrations. Gratitude was expressed both for the parents who 7 years ago fought to save the kindergarten, and for the ones helping today in all the organizational and educational issues: Julita Kraińska, Łuksz, Skórka, Rudzianiec and Niewiadomski family.

On occasion of their kindegarten’s birthday, the children, incessantly watched by their arrect teachers, prepared a concert. For the elder children from the ” Pszczółka” group it was also a farewell with the kindergarten- they are going to school in September. The symbolic key to the kindergarten was handed down by the children from ”Pszczółka” to their younger friends from the ”Mróweczki” group.

Following the Traces of Polish Nobility in Lithuania

Conference about Polish language: there are successes, but there are not enough handbooks