About Polish education in the Polish Sejm 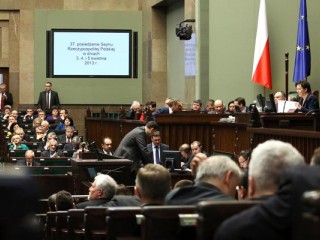 The need and the quality of support for teachers and students in educational institutions Polish diplomatic missions abroad (including a Lithuanian) discussed in the Polish Sejm deputies joined the parliamentary committees: Education, Science and Youth Liaison with Poles Abroad Committee and representatives of the Ministry of Education and Ministry of Foreign Affairs.

Help for teachers and students outside the country, both substantive and financial, has increased in recent years – assured the meeting of the committee in the Parliament and Foreign Ministry representatives. The members of the Parliament opposition referred to the information critically.

Members of the Joint Commission: of Education, Science and Youth, and of Communications with Poles Abroad been examined by information MEN and Ministry of Foreign Affairs on the functioning and Development of Education of Polish for abroad and of Polish education. Deputy head of the Ministry of Education reported that in the current school year 2012/2013 subjected to the Polish Ministry of National Education Development Center Education Abroad (ORPEG) sended to work 80 teachers who teach in 13 countries, more than 8.9 thousand students (including adults). (According to statutory provisions of Polish Ministry of opportunities to work with Polish teachers do not apply to Lithuania). “Another form of assistance is to provide textbooks and teaching aids aimed at teaching including the Polish language, history, geography and culture of Polish. ORPEG In 2012, handed over 72 schools from 17 countries expatriate nearly 11,000 textbooks and teaching aids” – informed Jakubowski. With the possibility of Polish schools in Lithuania could also be used, however – as did learn Wilnotece – only a few schools have signed up to the program, but still manuals (from the time of the demands in September) has still not reached the recipient …

Deputy Minister Maciej Jakubowski noted that the Ministry of Education coordinates the professional development of Polish teachers (this form of aid in 2012, including more than 1.1 thousand teachers from 44 countries) and support the organization of summer camps for Polish students abroad. “In 2012, organized two educational camps, which was attended by a total of about 600 people,” – he added.

According to data from the Association of Polish Educational Society in Lithuania, teachers from Lithuania quite often and successfully make use of any kind of training and updating as, in recent years, this aid decreased slightly. However, this may be due to the fact among others eliminate a few years ago the position of coordinator of Polish education matters in the Lithuanian Ministry of Education and Science.

The deputy Foreign Minister Janusz Cisek, who in the department is responsible for Consular Affairs and the Polish community, informed Members that in recent years has increased the amount of money that through consular and diplomatic institutions is transferred to the education of Poles abroad. He noted that in 2011, transferred the sum of more than 5.1 million zł, while in 2012 – more than 11.1 million zł. This year, the Ministry of Foreign Affairs plans to spend for this purpose about 12.8 million zł. “This is one of the forms of support. Second mode is the competition, which writes to cooperate with Polonia and Poles abroad. In 2012, for this purpose in the field of education, and this is one of the priorities of the contest, spent more than 17.8 million zł , but this year it will be more than 20 million zł “- said J. Cisek. “In other words, the sum of about 78 million zł in MFA-related activities of the Polish community in 2013, will be transferred for purposes related to education of about 33 million zł. It is therefore the sum of the parent” – said the deputy head of the Ministry Foreign Affairs.

It is still unclear what the exact amount has been allocated this year to support the Polish education in Lithuania. Two years ago, the most spectacular form of assistance was a school grant for each first-form pupil in Polish schools in Lithuania in the amount of one thousand Polish zlotys. Last year, abandoned direct financing layette, but for every child of the first class was awarded a grant to organize extra-curricular school activities. Also, two years ago, Polish Ministry of Foreign Affairs together with the Ministry of Education has prepared a series of training courses for Polish teachers (mainly of the initial) near Warsaw Sulejówek. Every school in aid from the Ministry of Foreign Affairs has gained modern multimedia projectors. Ministry of Foreign Affairs of assumptions withdraw from investment projects, but last year finally allocated to the nearly 400 thousand for the renovation of Polish schools in Vilnius, the Vilnius and Salcininkai. Died while holiday trips. Project summer camp has been very limited even at a time when funding flowed from the Senate. Ten, and even six or seven years ago, nearly a thousand Polish students benefited from summer holiday deals in Poland. Currently, the Polish students in Lithuania, in principle, have been deprived of these opportunities. It does not work, none of the government’s program to support educational trips to the Native country.

In the discussion of information between the two departments members of the Parliament pointed to the lack of long-term and coherent educational policy of Ministry of Foreign Affairs and abroad, including the failure to take account of the needs of a large emigration of Poles, including to the UK. Members and representatives of education abroad raised the issue of underfunding so. School consultation centers where students learn Polish. Members also asked about the lack of funding a hundred schools on Saturdays and Sundays of the Polish language in Ukraine, hold educational investment in Ukraine, in Łanowicach and Lithuania, and the Polish program to support teachers in the Vilnius. They also wanted to know if the teachers in Poland are determined by the Ministry of Education curriculum, what will be the fate of the Polish school in Athens, as well as whether and when the Polish government signed an educational agreement with Kazakhstan. Also raised the question of control of finance allocated to education of Polish students abroad. In response, Deputy Minister of Education stressed inter alia, that the government in recent years has increased funding for school consultation points, where in addition, the number of students. “In 2010, there were a total of about 14 thousand. Pupils, in 2011, it was already more than 14.5 thousand and in 2012, more than 15 thousand pupils. And the expenditure has increased from 29 million zł to more than 30 million zł. It is true that this kind of support is decreasing, “- said M. Jakubowski. Referring to the question of the Polish school in Athens, said that recruitment to it will disappear. “Polish Education should be based on supporting education and not replace education in local schools, because it is harmful to students. But of course this does not mean that the students of this school will not support”, – assured the deputy minister. After the discussion, the chairman of the Parliamentary Committee for Liaison with Poles Abroad, Adam Lipinski, pointed out that the functioning and development of education abroad and Polish education should be continued at the next meeting of the joint committees.

On the same evening in the “Closer” John Pospieszalski in TVP 1 also considers the subject of Polish education abroad. In the discussion concerned only the state of Polish education in the West (mainly in the case of France), but the author of the program ensured that in the near future in this program he will also run a discussion about  the condition of Polish schools in the East and the assessment of aid flowing there from Polish.

In 98 percent of the vote, television viewers voted for the funding of Poland and Polish education abroad.

The Council endorsed the organizational models, the design was approved by the pre-primary social services plan

PzW in Antarctica (2): in the footsteps of Arctowski and Dobrowolski