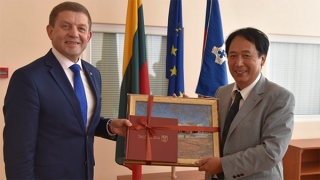 Ambassador of Japan in Lithuania Toyoei Shigeeda and Second Secretary Hiroya Inoue visited Šalčininkai on Monday 29th of May. The meeting took place in Šalčininkai District with its’ authorities, – then they visited Jan Śniadecki Gimnazjum, Stanisław Moniuszko Music School in Šalčininkai and Jašiūnai Manor.

He highlighted that the region is not only special when it comes to its’ nature, but tradition and people living here will certainly interest tourists from Japan. Toyoei Shigeeda has been following culture, education and investment climate in Europe.

The Holiday of Family in Marijampolis: Fun in the scenic Palisada Park

Snarski: My petition is not meant to be against Lithuania

Conservatives propose establishing a special fund for the Vilnius region

Conservatives do not stop trying to appoint the Development Fund of South-Eastern Lithuania, independent of local…
Wilnoteka October 4, 2016

The councils of Vilnius and Salcininkai regions were laureates of the traditional prizes “Auksinė krivūlė” awarded by…
L24.lt December 9, 2015

At the beginning of December, a celebration took place at Adam Mickiewicz Gymnasium in Dieveniškės. In the Šalčininkai region,…