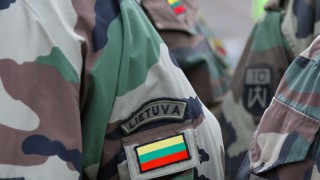 The Poles, Russians and representatives of other national minorities living in Lithuania believe that, if there was such a need, the citizens of Lithuania would defend their country against the aggressor. Such information emerges from a research conducted by the Baltijos tyrimai/Gallup public opinion poll company at the request of the Eastern Europe Studies Centre. Though there are many people supporting the policy pursued by Putin’s Russia among them, according to the director of the Eastern Europe Studies Centre Linas Kojala, there is no reason to be afraid that national minorities jeopardise the national safety.

As delfi.lt reports, 500 people of Polish and Russian nationalities, as well as representatives of other national minorities aged between 18 and 74 participated in the study. The survey took place from 27th June to 12th July in Vilnius, in the Vilnius and Šalčininkai regions, in Klaipėda and Visaginas, so where representatives of national minorities live densely. Fifty-five percent of respondents comprised of women, the majority of them aged between 50 and 74. Forty-six percent of the poll participants were Poles, 35 percent were Russians, 8 percent – Belarusians, 6 percent – Ukrainians, 2 percent – Jews, 3 percent – representatives of other nationalities. Most of them, i.e. 83 percent, were born in Lithuania.

Respondents had to answer several dozen questions concerning loyalty towards Lithuania, among other things. Sixty-four point eight percent of them responded affirmatively to the question whether the citizens would defend Lithuania if it was attacked.

When commenting on the public opinion poll results, the vice-director of Baltijos tyrimai Romas Mačiūnas pointed out that those who knew Lithuanian well, had a higher education diploma, and privately had a Lithuanian spouse showed more self-confidence in their answers to questions about this issue.

The authors of the studies report that, among those who claim Lithuania’s citizens would defend their homeland in the event of danger, there are more graduates of Russian schools than of Polish ones; out of the people who completed Russian schools, 65 percent agreed with this thesis, and out of those who completed Polish ones – 59.9 percent. More people who were hesitating were in the Vilnius and Šalčininkai regions, and fewer in Vilnius. Forty-two percent of respondents from the Vilnius and Šalčininkai regions said they “rather agreed” with the thesis that the citizens would defend Lithuania if it was in danger, and 8 percent said they “completely agreed”; in Vilnius – respectively, 48.3 percent and 22.1 percent; in Klaipėda and Visaginas – 51.8 percent and 21.7 percent.

The thesis that part of the national minorities’ representatives is disloyal towards Lithuania had more or less the same number of supporters and opponents. Approximately 1/3 of the respondents agree with it, 33.4 percent “neither agreed nor disagreed”, 31.2 percent “disagreed”. 35.5 percent of those who agreed with such a thesis comprise of people who graduated from Polish schools.

Fifty-two point eight percent of the public opinion poll participants agree with the opinion imposed by the Russian propaganda saying the policy pursued by Russia is the appropriate reaction to the actions of the US and NATO directed at it. Forty-two point eight percent think the annexation of Crimea by Russia was not unlawful. Forty-eight point three percent of people who completed Russian schools and 39.5 percent of those who graduated from Polish ones claim that Crimea is part of Russia. Forty-three point four percent of people who completed Polish schools and 41.2 percent of those who graduated from Russian schools agree with the opinion uttered once by the president of Russia V. Putin that the dissolution of the USSR was the greatest geopolitical catastrophe.

The director of the Eastern Europe Studies Centre Linas Kojala does not dramatise: “We can notice here some tendencies: the social groups that are integrated better, e.g. speak Lithuanian at ease, have more optimistic views on such issues as the defence of Lithuania in the event of danger. Among those who speak Lithuanian worse or don’t know the language at all, the percentage is much lower, but it has to be stressed as well that not many people disagree entirely with this thesis,” said L. Kojala.

According to the director of the Eastern Europe Studies Centre, “it is unjustifiable to generalise and assume that national minorities jeopardise the national safety.”

From now on – Lithuanian language also in India