From now on – Lithuanian language also in India 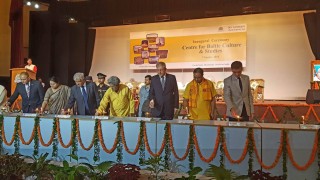 The opening ceremony of the Institute of Baltic Culture and Languages, fot. in.mfa.lt

In the city of Haridwar (state of Uttarakhand) in India, at the private Dev Sanskriti University, an Institute of Baltic Culture and Languages was opened. Governor of the state Uttarakhand Kirshan Kant Paul and the ambassadors of Lithuania, Latvia and Estonia participated in the opening ceremony on Sunday, 7th of August. Meanwhile, Sigma Ankrava, a professor of Latvian University, will become the manager of the institute.

In the Institute of Baltic Culture and Languages, there will be two major of studies: Lithuanian, Latvian and Estonian languages and Culture and Traditions of Balts. Meanwhile, Sigma Ankrava, a professor of Latvian University, will become the manager of the institute.

Based on : Lithuanian Embassy in the Republic of India

Jewish Cemetery at Zarzecze under the state protection