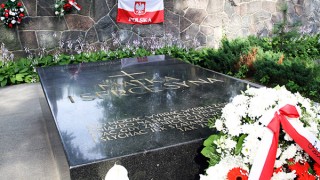 Mausoleum of the Mother and the Son’s Heart at Vilnius Rossa, fot. wilnoteka.lt

On the Armed Forces Day, 15th of August, the Polish Ambassador in Lithuanian Republic Jarosław Czubiński and an Attaché of the Defense of the Polish Embassy col. Mirosław Wójcik with their coworkers will lay a wreath at the Mausoleum of the Mother and the Son’s Heart at Vilnius Rossa.

Armed Forces Day is a holiday in order to commemorate Polish armed forces and is traditionally celebrated on the 15th of August in a remembrance  of a victory of the Battle of Warsaw, fought in 1920 during the Polish-Bolshevik war.
During the time of the II Polish Republic, a “Soldier’s Day” was commemorated in a remembrance of battles fought in 1920 in a defense of the Homeland.  A date of 15th of August was chosen as on that day, the first troops of the 21. Mountain Division started to force Wieprz of Kock. It was a beginning of the counter resulting in a breakdown of Russian troops of the Western front.

“Soldier’s Day” was never cancelled – it had been solemnly celebrated till 1947. In subsequent years, its celebration was abandoned and the Armed Forces Day (on the 12th of October)was established in order to commemorate the baptism of fire of the first Tadeusz Kościuszko Infantry Division. In years 1990-1992, the holiday was celebrated on the 3rd of May, the anniversary of Constitution of the 3rd May.

Jarosław Czubiński, who is a Polish Ambassador in Lithuania, and col. Mirosław Wójcik and their coworkers, as every year on the occasion of the Polish Armed Forces Day, will lay a wreath at the Mausoleum of the Mother and the Son’s Heart at Vilnius Rossa.

Celebration of the Polish Armed Forces Day in Vilnius
Mausoleum of the Mother and the Son’s Heart at the Cemetery at Rossa in Vilnius
15 August, 2016, 10.30am