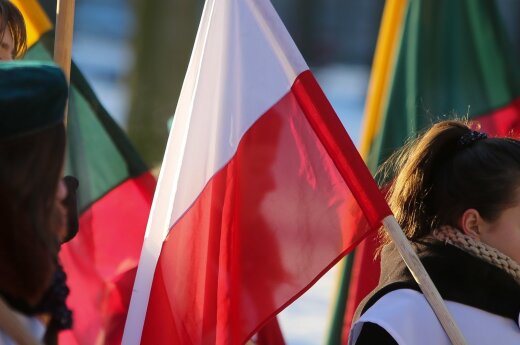 According to the Department of Statistics, national minorities in Lithuania constitute 15,8 % of population. The biggest minority is the Polish one and it consists of approximately 200 000 persons. Russian, Belarussian and Ukrainian communities are also quite big.

In 2011 the number of different nationalities in Lithuanian increased to 154. Consequently, it does not come as a surprise that the government has renewed the activities of the Department of National Minorities which was abolished by Conservatives and Liberals. The aim of the Department is to create a friendly environment which will ensure a smooth integration of national minorities with the rest of the society. Moreover, the task of the Department is to make sure that there are good conditions for keeping national identity.

It can be said that in recent years situation of national minorities has changed for the better: teenagers have good command of the official language; they understand legal and social system after completing their education in junior high schools or schools. We observe that such persons have less difficulty in finding an employment. They actively take part in political life of the country and they join cultural activities.

What kinds of cultural activities are there?

There are annual folklore festivals that nowadays have become traditional ones, namely “Pokrowskije kołokoła”, “Polish flowers” (“Kwiaty polskie”) which are subsidized by the government. Also quite popular is the festival of national communities bands “W krugu druzej”, the festival of pupils of the East Lithuania’s art “Rytų Lietuvos žiedas” and the European Days of the Jewish Culture. We hope that the international festival “Baltijos aušros” will also become a tradition. That festival shows multicultural aspect of Lithuania.

I think that you will agree with me that the South-East of Lithuania stands out from the rest of the regions in the country. What is the mission of the Department in that region?

You have said that there is cooperation but it is said that Lithuanians aren’t a very open nation. What do we need to change in order to become a more open nation?

Lithuania is a peaceful and multicultural country even though some problems occur which result from culture diversity. I think that minor misunderstanding are caused by ignorance or lack of understanding. In such a case our duty is to understand custom and tradition of nations which live near us. Education, dialogue and getting to know others are cornerstones of open and tolerant society. In Lithuania there are six national minorities culture centres. We will use them to spread culture in the regions and induce national tolerance.

Is the Department planning to join the initiatives which task is to preserve cultural heritage of national minorities?

Is the department going to introduce preventive activities aiming to prevent propaganda manipulation?

As I have said before, misunderstanding resulting from national diversity is incited by lack of information or spreading incorrect details. Ignorance, reluctance to understanding others, prejudice and lies are the worst enemies. It is a pity that some politicians, journalists or commentators do not try to change their views or views that are imposed on them and do not try to find out how the situation really looks like. We will shape an open society and citizens’ views by spreading information. We have already started the cooperation with representatives of various domains and we share with them different kinds of information. People become more understanding and tolerant if they familiarize themselves with the unknown. Moreover, we will soon announce the competition for journalists through which we will encourage different cultures to enter the dialogue. Our aim is to promote intercultural dialogue, maintain amity and justice. We spread information because we want to help other people to forsake stereotypes and fears.

Some people may think that problems of national minorities in Lithuania are known for a long time and the primary task is to find a solution.

I reckon that we should guarantee a close cooperation between national institutions and national minorities and the whole society. We observe that the government is prepared for that so Lithuania can continue to follow the path determined by Europe and enhance solidarity of national minorities and defend their rights, national heritage and language.

Thank you for the interview.

The government approved the National Development Programme which shapes the development of the country in 2014-2020. One of the aims of the programme is to promote integration of national minorities and, at the same time, to ensure maintaining ethnic identity, participation in public life and amity in relations between different nationalities.

Marriage certificate with “w” in the surname was issued