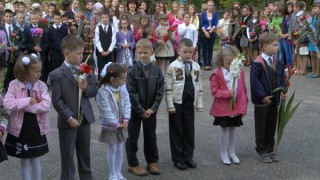 Exactly in one week, on September the 1st, a new school year will begin. 1 060 children will start attending Polish schools. The number is smaller compared to the situation from 20 years ago when over 2 thousand kids were starting their education in Polish schools annually. However, if one takes into consideration the atmosphere surrounding Polish schools in Lithuania, population decline and economic emigration – it is still pretty good.

„During the last twenty years, the confusion over Polish schools has been deliberately created by educational authorities, politicians and media. Not only Lithuanians, but also Poles create a tense full situation. They cause chaos supposedly in good faith and in good interest of Polish schools.  For over 20 years we have been swimming against the tide – it is a fact” says Józef Kwiatkowski, chairman of Association of Polish Schools Teachers in Lithuania. Kwiatkowski compares Polish education in Lithuania to a spring: “That spring is getting more and more compressed, but there is a moment when it starts to expand. We can observe a similar phenomenon lately: the situation in education has led to intensification of the activity of Polish community, the Forum of Parents of Polish Schools, strike committees, student committees have been created. These actions reflect on the fact that an objection to actions unfavourable for Polish schools amongst the community is starting to appear.

Nevertheless, it is evident that the number of students in Polish schools has dropped. There used to be over 22 thousand pupils, now – a half less. Józef Kwiatkowski explains that these numbers are the consequence of population decline and migration of the inhabitants. For example, in Švenčionys District Municipality, 17 villages have been removed from the registry this year. These are deserted villages. In the whole country, around 500 villages have been abandoned. The number of people in Polish schools is decreasing as an effect of unfavourable policy of national authorities. “20 years ago, the so called county schools started to appear in Vilnius. In these schools Lithuanian was the medium of instruction and they were directly subordinate to Vilnius County Administration (currently they are subordinate to the Ministry of Education). In Šalčininkai District Municipality and Vilnius District Municipality around 20 such schools were built. Around 80 percent of the pupils in these schools are children from Polish or ethnically mixed families. That fact influences the diminishment in the number of pupils in Polish schools.” – claims chairman of “School Matrix”.

Even the smallest success is worth celebrating; for a couple of years the number of first graders didn’t fall down. Every year, around a thousand of 7-year-olds begin their education in Polish schools. According to the information gathered by “School Matrix”, this year 1060 pupils will attend first grade. “It’s not an increase yet, surely a stability.” – Kwiatkowski asserts.

„The results of Matura exams in Lithuanian showed that we are right by saying that a Polish child has an opportunity for unconstrained and well-rounded development only in a Polish school. Children from non-Lithuanian families who studied in Lithuanian county schools do not obtain better results than children of the same age attending Polish schools. This relation can be illustrated on an example of four cities in Vilnius County: Kowalczuk, Podbrzezie, Rudomino and Mejszagoły. Polish schools students who were studying Lithuanian in accordance with unified programme for only three years, achieved better Matura exam results than Lithuanian schools students who have been learning the Lithuanian language as their native tongue since the first grade. What does it tell us? It tells us that a child from Polish or ethnically mixed family did not learn what it was supposed to in Lithuanian school. It must be emphasised that the teachers of Lithuanian have put a tremendous effort into preparing their student to exams and that in Polish schools pupils devoted more time to Lithuanian than to other subjects. All statements about the inferiority of Lithuanian schools are not reflected in reality.” – Józef Kwiatkowski explains.

In this year’s school ranking published in „Reitingai” magazine, among the 100 best schools in Lithuania 45 are located in Vilnius, including the renowned ones which organize their admissions on the basis of preliminary exams. John Paul II Junior High School is placed 36th in the national ranking, but 17th in Vilnius, Władysław Syrokomla School is ranked 58th, but 21st among Vilnius schools, J.I. Kraszewski Junior High School is respectively 71st and 22nd. Józef Kwiatkowski mentions another numbers: 32 from 40 Polish high schools in Lithuania have already acquired a status of a junior high school. Due to the fact that the deadline for the reorganisation has been prolonged until 2017, a couple more schools have a chance of accreditation of high school teaching programme. According to the chairperson of “School Matrix”, this proves the high standard of Polish schools.

Why are Polish students not among the winners of international subjects Olympiads? “In this case, I cannot cite statistics, that’s why I do not want to formulate an opinion. I know, however, that Polish schools students take part in republican Olympiads. I can only suppose that they may be focusing on the Olympiads in their mother tongue. “School Matrix” organises around 20 different events and contests every year, moreover, Olympiads and contests are organised by the Association of Poles in Lithuania, Departments of Education and particular schools.” – says Kwiatkowski.

The biggest fuss surrounded Vilnius schools lately. One can try to find somebody to blame for the fact that certain school did not receive accreditation in time, or that there is no common stand of Polish schools about the network of Polish education in the capital. Nevertheless, it is a fact that in Vilnius County four out of five children from Polish families attend Polish schools, in Vilnius it is only every other child. Why is that? Lack of information or trust? Józef Kwiatkowski claims that is a permanent “set of determinants”. “On Thursday, the 20th conference of Vilnius County Department of the Association of Poles in Lithuania entitled “Polish child in a Polish school” will take place. In the last 20 years in the Vilnius County, an everyday, child-oriented work has been performed by the parents. Obviously, it is easier in places where there are a lot of Poles: if a neighbour’s child attends Polish schools, I will let my child go there as well. It is easier to get through to every family, to meet with the parents. The contact is closer, moreover, a lot of Polish events take place. In Vilnius, Poles are dispersed, they are in Lithuanian environment at work. Sometimes, those whose children learn in Polish are criticised by their colleagues. There are more mixed families, it is more difficult to maintain one’s national identity and contact with Polish culture. Thus, in Vilnius it is more difficult to send an information about an offer of Polish school to a Polish family. In small cities, teachers reach out to Polish families, in Vilnius parents search for schools by themselves. Parents of the students of Polish schools are aware of their identity, they do not need to be persuaded as to in which language their children should be taught.” – says the chairman of “School Matrix”.

As Józef Kwiatkowski points out, teachers should spend more time promoting the school and its educational results. Information about Matura exam results, students’ achievements or work outside the classroom should be available for everyone. Constructive criticism is also needed, but successes should be mentioned as well. How else can we convince those who are in doubt?

Polish schools will be attractive, if Polish culture and identity becomes attractive. We need to admit that currently there is less Polishness in Vilnius than there used to be in the Soviet times when people listened to Polish Radio, watched Polish TV and read Polish newspapers or magazines. Right now, there is a big selection of Russian newspapers, magazines, TV programmes, simultaneously, Polish offer is much more limited. “Apparently, Russia appropriates more funds on promotion of its culture than Poland” – interviewee of Wilnoteka concludes.

Polish teenagers do not know Polish culture. Of course there are families in which parents pay attention to what they children listen, watch and read, but they are a minority. It is challenging to like something unknown. Meanwhile, in Polish schools there are a lot of students who have never been to Poland. 20 years ago, every summer “School Matrix” would organise a summer camp for 500-600 Polish schools students. Children would attend trips or summer camps coordinated by schools, Counties or parishes. Every summer, more than 2 thousand kids had an opportunity to get to know Poland, work out on their Polish, meet with their peers. It is a pity that, due to the lack of funding, these events are no longer organised on such scale.

„However, we cannot complain on the lack of support from Poland. Had it not been for help from Poland, renovating and equipping schools or organising trainings for teachers would be impossible.” – adds the chairman of “School Matrix”. The “Help for Poles on the East” foundation carries out a big project: in both 2014 and 2015, the foundation appropriated around 2 millions złoty for the support of Polish schools and kindergartens. At the beginning of a new school year, about 150 schools and kindergartens will receive money for buying technical equipment, furniture or building playgrounds. It a very significant help. Hopefully, there will be many children in Polish schools. But with that Poland will not help us.

On the basis of: Own information.

Aim: to deprive Poles of schools