Aim: to deprive Poles of schools 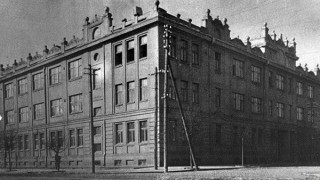 The dramatic history of Poles living in the Lithuanian area between the wars actually constituted a continual and never-ending torture, chicanes, violation of their language rights using the administrative methods and often physical violence. Perhaps the biggest ferocity was used to persecute schools with Polish as the language of instruction. The young country’s authorities assumed that by depriving the Poles from Kaunas of teaching in their native language along with preventing them from any contacts with the Motherland, they will Lithuanise the Polish living in the Kaunas area or Samogitia. It should be reminded that since 1938 there were no diplomatic or business relations with Poland, there was no direct rail or road links functioning, not even the post office. Letters and packages were first sent to one’s friends from Germany or Latvia, if one had some there, and then they were sent to Poland. A similar procedure had to be followed the other way round.

Over the years, when it is hardly possible to find Polish traces in the so-called Kaunas Lithuania and to hear Polish language in the old backwater of Lauda or Wiłkomierz, it gets difficult not to notice that the Lithuanian authorities’ policy between the wars and its continuation during the Soviet Lithuania times when Polish schools were not allowed to exist inside the pre-war borders of Lithuania, was effective. Out of two hundred thousand Poles in the Kaunas, there is only a fraction left now.

I am mentioning the number of 200 thousand Poles in the Republic of Lithuania as it seems to be the closest to the truth, although it strikingly differs from the official data of the 1923 census, according to which Poles constituted only 3,2% of the citizens of the contemporary Lithuania, counting over two millions of people back then, which would make it 65 thousand. For a more precise establishment of the real number of Poles, we would have to look at the voting statistics, that is, to count the votes for the Polish politicians during the Lithuanian Seimas elections, which also took place in 1923. In these elections, 202 026 people voted for the Poles. It is really highly unlikely, in the time of the Lithuanians’ bitterness caused by not having Vilnius and a general hate campaign on Poles and Poland inspired by the authorities, that the Lithuanians would vote for Polish politicians.

Meanwhile, in terms of the census, it is worth mentioning that right after publishing its results, councillors representing the German, Polish, Jewish, and Russian national minorities protested against census’ forgeries along with presenting over 800 documented examples of these forgeries made by enumerators or officials. When it comes to the methods of carrying out the census concerning Poles, one of the catches was putting only the letter “L” in the column with nationality. Then, instead of L-enkas (Polish), they added L-ietuvis, which means Lithuanian. Apart from that, forgeries were not only concerning the Poles. In his exceptional and perfectly documented work called “Devide et impera” written in the times of war, the Vilnius USB professor Konrad Górski instances a German who was not asked about his nationality at all but was noted as a Lithuanian. As it turned out, the German had been chosen by the German minority to be an MP in Lithuania.

At first, after Lithuania’s independence, there were 30 Polish schools for, let me remind you, 200 thousand Poles (that is 10% of all population of the country). But even that was too much. During the school year 1925/26, the number had fallen to seven elementary schools in which only 10 teachers were hired! In 1926, during the 6-month-long left-wing government ruling in Lithuania and the liberalisation of the law (among many things, the state of emergency, which had been going on for years, was abolished), there was a sudden raise of the Polish public schools. In the 1926/27 school year, the number of Polish elementary schools went eleven times higher – up to 77, and the number of children attending them was 4 114 (a year earlier only 375 little Poles were going to elementary schools).

The radical growth of the number of Polish language schools was in that time (1926) possible for reasons such as the fact that to register one’s children to a school, all one had to do was to declare the Polish nationality. Providing information about the parents being Polish was enough for the children to attend a Polish school. However, as soon as in the following year, under the provisions published by the Minister of Education, to send your children to a school with Polish as a language of instruction, you had to have Polish nationality put in your documents. And that was what many parents usually had a problem with since they had been earlier registered as Lithuanians against their will. Desperate people decided to take actions to officially change their nationalities in the documents. In reality, that was close to impossible as the authorities basically stopped fixing the notes concerning nationality in personal documents.

In the 1927/28 school year only 20 Polish public schools in Lithuania were open. In the mid-thirties, the number decreased to 14. In 1937 there were only 10 schools. Apart from Polish public schools, there were also state schools with Polish as the language of instruction. There were supposed to be 18 of them. Professor Konrad Górski wrote about them: “But are there really 18 schools, and how do they look like? – Well, the number is uneasy to check because the Ministry of Education has not yet given anyone the list of locations where the said schools would be placed, and then the Polish language is the language of the instruction in a very restricted way. It is mainly used to communicate with the teacher for as long as the children know enough Lithuanian to be taught in it. Teachers are not required to know spoken or written Polish, and the education there is exceptionally anti-Polish. Is it then right to consider these schools Polish?”

Another chicane used against Polish (public) education in Lithuania was the refusal of giving accreditation to Polish teachers by the Ministry, which was a condition of being hired, or the deliberate delaying of giving such accreditation. The school year went on, and the teacher did not get the proper documents which would allow him or her to start teaching.

An equally tragic situation was happening in the secondary education. In the Kaunas area of Lithuania there were hardly 3 Polish public gymnasiums: in Kaunas, Poniewież, and Wiłkomierz. By the war’s outbreak, there were two left. The last of the mentioned schools was closed in 1939. A year before, the Ministry did not send delegates for the Matura exams to the Polish gymnasiums, forcing the students to writing the exams again before the national commission. In this case, the actions of authorities was a punishment to the principals of gymnasiums for not removing the students whose parents did not have Polish nationality written down in their passports. It is worth adding that, to study in a Polish gymnasium, it was obligatory to have notes acknowledging both the mother and father’s Polish nationality in one’s documents.

The Republic of Poland authorities, in response to the persecution of Poles and destroying Polish education in Lithuania, answered with victimising the Lithuanian minority in Poland by closing down their schools. The actions of Piłsudski’s followers, ruling the country after May 1926 in a dictatorial way and without democratic legitimation, should be considered stupid, malicious, and, most of all, harmful. After all, the Lithuanian citizens of Poland could not be responsible for the anti-Polish policy in Kaunas. And, unfortunately, they became its hostages. Nevertheless, even after the administrative repressions, the capability of Lithuanian education in Poland was still greater than the Polish education in Lithuania. In the 1937/38 school year, there were 23 schools with Lithuanian as the language of instructions (including one high school), and 44 schools in which they taught in both Polish and Lithuanian. According to the official, although estimated data, Poland was inhabited by approximately 70 thousand Lithuanians.

It is difficult to estimate what the fate of the Polish schools in Lithuania would be if the war did not outbreak. However, the fact that, after some time, the Polish education would be totally destroyed cannot be excluded. The memory of the independent Lithuania authorities’ policy towards Poles, especially in terms of education, still causes an understandable concern about the future of Polish schools in the Vilnius area. Even more that the Lithuanian education policy in the last decades cannot make the Polish minority feel optimistic.

There is money for national minorities’ culture development