Marriage certificate with “w” in the surname was issued 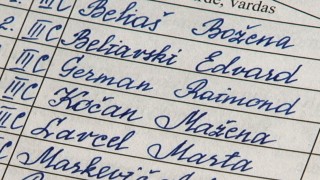 The City of Vilnius Civil Registry issued a marriage certificate in which the Lithuanian citizen’s surname was written down with the letter “w” in it, in accordance to the spelling of the surname of her husband, a citizen of Belgium. It is the first such an occurrence in Vilnius. Admittedly, it is not an act of the official’s good will but performing the court’s decision.

On 30th July 2015, the City of Vilnius District Court bound the Civil Registry to change the surname of the Lithuanian citizen Ernesta Pauvels to “Pauwels”, and to issue a new marriage certificate. The Lithuanian-Belgian couple appealed to the court when it turned out that, because of the change in one letter between the husband and wife’s surname, some legal problems started to appear in Belgium. The European Foundation of Human Rights supported Mr and Mrs Pauwels in gaining their right to use the surname as it is written in original.

“The court’s decision was implemented as it was not sued, therefore we performed it: the citizen of Belgium has already received the new marriage certificate” – the director of the City of Vilnius Civil Registry Ilona Jurgutienė informed. Jurgutienė also confirmed the information that after the court’s decision about the Pauwels surname’s spelling was made, a Lithuanian citizen Malgožata Runevič-Vardyn also went to the Civil Registry as she and her husband, a Polish citizen Łukasz Wardyn, fight for her rights to have the original first name and surname: Małgorzata Runiewicz-Wardyn. She was, however, informed, that the court’s decision from 30th July concerns only that one specific case.

The City of Vilnius municipality appealed to the District Court and the Ministry of Justice to clarify whether the decision about the Pauwels marriage can also be applied to other, similar cases. So far, there is no answer.

During the autumn session, the Lithuanian parliament is to return to discussing the projects of acts on non-Lithuanian surnames’ original spelling. Poles living in Lithuania have been fighting for their right to use their first names and surnames in Polish for years. It is also a current issue for Lithuanian citizens who get married to foreigners.