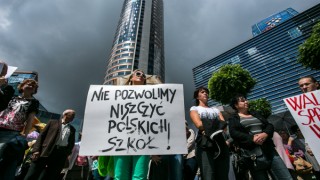 A piquet in defence of schools outside the local government, fot. wilnoteka.lt/ Bartosz Frątczak

“We are fighting for justice in education”, “ We won’t allow Polish schools to be closed down!”, “No to the bulldozer policy” – posters in Polish, Lithuanian, and Russian with such contents are greeting the politicians of the Council of Local Government of the Capital City who have gathered for a session. On the square outside the residence of the city’s authorities a picket in defence of Polish and Russian schools being reorganised has started. The protest’s organisers are parents who do not know what will happen to their children in the upcoming school year.

The picket taking place outside the building of the Local Government of the Capital City gathered approximately 400 people. Among them there are parents, students, and teachers from Vilnian schools which have been decided to be degraded to elementary schools by the city’s authorities. The protesters expected the city representatives to meet them. Unfortunately, none of the people in charge showed up. Only the councillors of Electoral Action of Poles in Lithuania met the protesters and assured them that they will seek to positively settle the problems concerning schools.

During today’s session, which will take place at 2PM, the Local Government of the City of Vilnius’ Council is going to make a decision about the issue of reorganisation of the following schools: Ateities, Senamiesčio, Saulėtekio, Centro, Aleksandro Puškino, Fabijoniškių, Levo Karsavino, as well as Lazdynai and Szymon Konarski. Starting with new school year, these establishments will no longer have the senior year high school grade level.  The only school to which the authorities of the capital city want to “give a chance” is the Polish-Russian J. Lelewel High School. However, there is one condition to be fulfilled by the school community: the authorities will allow to keep grade levels 11-12 and for the school to seek to gain the status of a gymnasium in exchange for dereliction of the building situated in Antakalnis. The school is to move to Żyrmury on the other side of Wilia, to a building in which The A. Wiwulski Primary Education Branch is currently located. In such an agreement Antakalnis and suburban estates would be left with no Polish school.

On behalf of Electoral Action of Poles in Lithuania, the councillor Edyta Tamošiūnaitė submitted three alternative projects of acts concerning reorganisation of the Lelewel school and 9 other schools of the city, including one Lithuanian school. She suggested keeping the Lelewel school in the same building in Antakalnis and continuing to form grade levels 11-12. The Local Committee of Education, Culture, and Sport, which was deliberating on Tuesday, voted against these suggestions.

Parents of children belonging to national minorities write to president

Decision of the capital Council: “Lelewel” to Żyrmuny