Decision of the capital Council: “Lelewel” to Żyrmuny 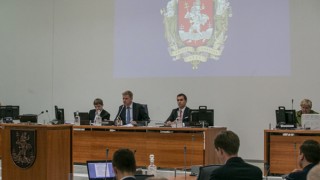 The liberal-conservative bulldozer drove around the schools of national minorities in Vilnius. The High School called after J. Lelewel has a chance to obtain the status of a secondary school, but since 1 September 2016 it will have to move from Antokol to Żyrmuny. The Vilnius Government Council made this decision in the precipitate way. The fortune of ten schools, including two that teach in Polish (the High School of Lazdyna and the High School of S. Konarski) will be known during the next meeting.

AWPL (Electoral Action of Poles in Lithuania) councillors proposed to stop the reorganisation of schools: it is allowed by the amendments of the Education Act adopted in June by the parliament, which establish the deadline for reform was postponed to 1 September 2017. They prepared some drafts concerning the School of J. Lelewel, according to which the school was to stay in the same building and then proceed to the accreditation process. The majority of voters decided, however, that the three projects submitted by AWPL were even not worth of discussing, because “they overlap with the projects prepared by the Department of Education”. It was the Minister of Education and Science, Audronė Pitrėnienė, who appealed to suspend the decision about the School of J. Lelewel reorganisation. All was attached in the letter sent to the councillors by her.

In front of the metropolitan government building, there was silent protest of parents, students and teachers during the meeting. Remigijus Šimašius claimed, however, that all this action is “collecting cheap political dividends before the election,” and added that, according to information he had obtained, the residents of the Vilnius region were persuaded to participate in the protest.

During the meeting of the Council, the students’ parents of the reorganising schools expressed their thoughts. Jevgenija Skiland, the representative the Hight School of J. Lelewel, reminded councillors that in Antokol there are several Lithuanian schools and the only one school with Polish and Russian. Moving it to Żyrmuny will complicate the commute for the youngest children who live, for instance, in Kojrany or the estates along the niemenczynska highway. Dariusz Żybort spoke for the community of the High School of Sz. Konarski and he called for fair and prudent decision that would take into account the interest of students.

In the case of the Lelewel School, the city authorities’ acceptance depends on whether the school will agree to relocate the building to Minties street from 1 September 2016. They promised also its renovation and the creation of great teaching conditions. “What does have accreditation and changing the school building in common? It looks like blackmail” – said councilman Artur Ludkowski during the meeting. The majority’s votes decided about the future of the oldest Polish school: the High School of L. Lelewel will maintain classes 11-12, it can apply for the status of a secondary school, but it will have to change the place.

There has not been decision on the rest of the schools yet. In the first voting, the majority of Councillors vote for the reorganisation of high schools into primary schools. The fortune of schools with Russian language: Ateities, Senamiesčio, Saulėtekio, Centro, Aleksandro Puškino i Levo Karsavino, Lithuanian school Fabijoniškių, Polish-Russian school Lazdynai and Polish school of Szymon Konarski will be known during the next meeting. The Polish-Russian school in Grzegorzewo has obtained the status of a secondary school. The Ministry of Education and Science had previously agreed on this, so the metropolitan council’s decision was only formality.

Legendary Polish school “No. 5” moves out to the other side of the river (31)