Minister of Education and Science dismissed 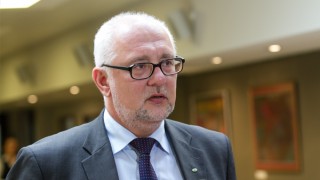 Minister of Education and Science, Dainius Pavalkis, lost his position. President Dalia Grybauskaitė signed a decree of his dismissal. Pavalkis ceases to hold the Ministry on 11 May. Temporarily, before a new head of the Ministry of Education is elected, its duties will be undertaken by Minister of Justice, Juozas Bernatonis.

Even though not agreeing with the stance of his party, Dainius Pavalskis submitted his resignation. He claimed that he constantly felt pressure from his party colleagues: there were demands for employing particular people to the Ministry, or undertaking specific decisions concerning the education policy.

Standing up for the defence of Minister were both Prime Minister and President. Even though defending him, Dalia Grybauskaitė signed the decree. Commenting on her decision, she claimed that it is „an ugly political example when a minister is forced to dismiss through means used typically by the criminal world, when blackmailing is used against the ruling majority, as well as against the prime minister.

At the moment of his leaving, Dainius Pavalkis fired also his assistant, Genoveita Krasauskienė, who, among others, was responsible for the accreditation of schools, and his counselor, Irena Ramelytė. Minister stated that this should have been done a long time ago as they did not carry out their duties, and the accusations directed towards him by his party colleagues should be addressed to the very dismissed office workers.

A meeting of the Bureau of the Labour Party is going to take place on Tuesday evening, during which applications for the successor of D. Pavalkis will be discussed. According to the coalition agreement, the positon of Minister of Education and Science is assumed by Labour Party. Chairman of Seimas, Vydas Gedvilas, was initially mentioned as the candidate for this position, who, in turn, claims that his chances are small, as a candidate for a minister has to be accepted by President.

Is departure of councilors from the Vilnius region to Osmania a threat to national security?

Vilnius region councilors have planned a weekend trip to Belarus, to the local government of Osmania,…
Znad Wilii August 31, 2018

Zalewska on Polish education in Lithuania: Driven and prompt actions are needed

“By December experts from Poland and Lithuania have to prepare appropriate solutions to the issue of Polish…
Znad Wilii September 17, 2017

Konarski school: Accreditation has been given for the 1st quarter of 2018