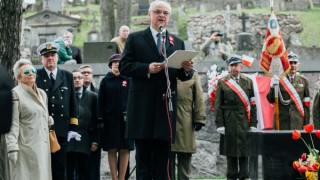 “While honouring our ancestors, the creators of our independence and their biggest effort, we should not forget that for us, Poles, todays celebration is day of happiness and hope, a symbol of great victory worked out by generations. Here, in this sacred place for every Pole, I appeal to remember to whom Poland owe the freedom, to remember about fallen, deceased and about their graves” – said Jarosław Czubiński, the Polish Ambassador for Lithuania during the ceremony in Vilnian Rossa. Each year, on the 3rd May Constitution Day anniversary, Polish diplomats and minority representatives put flowers at Mauzoleum Matki i Serca Syna (The mausoleum of a mother and the heart of her son) in Vilnian Rossa.

Polish social organisations were not as much numerous as they generally were during the ceremony because on this day the representatives of EAPL, the Union of Poles , Lithuanian Parliament and “Macierz Szkolna” representatives also participated in march on the Day of the Polish Community and Poles Abroad and May 3rd Constitution Day in Warsaw. A big number of young people arrived at Mauzoleum Matki i Serca Syna, Scouts and students from Polish schools but there were also veterans. The former Polish Ambassador for Lithuania from years 1996-2001, prof.Eufemia Tejchman was also present in march.

“We have gathered together, to celebrate here, with great Poles resting here in Vilnius, a very important day. The day of adopting a Polish constitution in 1791, the first one in modern Europe and second in a world, after USA constitution. This supremely groundbreaking and brave step has introduced the rules of democracy and equality between all residents.

The fact that our country has become a public changes leader and the champion of progression in European country makes us, Poles, really proud and we keep this spirit alive to this day. Lithuanians are right to be also proud because this constitution is our common acquis, heritage, common huge succsess but also a common challenge for our contries!” – said said Jarosław Czubiński, the Polish Ambassador for Lithuania.

After finishing ceremony in Rossa, Holy Mass has been celebrated and led by Tadeusz Jasiński, the parish priest of Parish of Holy Ghost.

European Parliament about discrimination of Polish people in Lithuania

Minister of Education and Science dismissed

Lithuanian Parliament is urgently proceeding with a project on facilitating the change of the nationality entry…
Znad Wilii March 7, 2022

During the war in Ukraine, more cyberattacks are observed in Lithuania. Still, this fact does not…
Other March 4, 2022