Liberals propose a referendum on the issue of dual citizenship 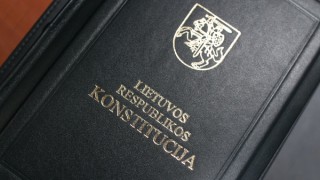 The Parliament begun a discussion on the proposal put forward by the Liberal Movement to hold a referendum on the issue of dual citizenship. It would be held in Autumn 2016, with the Parliament elections. Validating dual citizenship however, requires changes to the Constitution of the Republic of Lithuania.

‘I believe it is the goal of all parties and politicians to connect the citizens spread across the world. It is obvious that our laws and constitution must meet the demands of modern times. Out of concern for further development of our country and our economy, we must think about the number of citizens. We see however, that it is diminishing rapidly. Validating dual citizenship would be one of the possibilities to increase number of citizens’ – argued chairman of the Liberal Movement, Eligijus Masiulis, during the discussion in Parliament.

E. Masiulis said that Lithuania cannot punish by stripping away citizenship those, who for various reasons left the country. The data from the Department of Statistics shows that since 1990 about 800 thousand citizens left Lithuania.

Liberals propose to, by the way of referendum, elect invalid the second section of article 12 of the Constitution of Lithuania, which states that ‘with the exception of cases established by law, no person may be a citizen of the Republic of Lithuania and another state at the same time’. The draft of the act to announce referendum was supported by 58 Members of Parliament, opposed by 9 and 30 withheld their votes.

The draft submitted by liberals will now be discussed by the Committee of Law and Rule of Law and the Constitutional Commission. It will come back to the plenary meeting in 2016, during spring session.

Discussion about validating dual citizenship in Lithuania have been ongoing since the early 90’s. Supporters say that in the modern, globalized world it is simply a necessity, if Lithuania wants to keep up a bond with emigrants. Opponents believe that a citizen may be loyal to only one country. They also fear that dual citizenship may be sought by national minorities, and that may be used by Russia.

Liberalization of the law may only be done by the means of referendum: majority of citizens of Lithuania would have to consent to the change of relevant clause in the Constitution of RL. The possibility of such referendum was brought up already before presidential election in 2014.