Demolition of the tombstone wall has begun 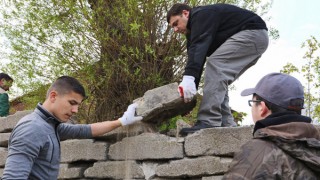 The scouts have begun the demolition of the tombstone wall they discovered in early Spring at one of neglected backyards in Algirdo Street in Vilnius. The city’s authorities did not find any funds to liquidate the wall and remove the concrete tombstones, so the workers of the allotment’s owner are here to help. After the scouts finish documenting them, they will be moved to warehouses belonging to Grind’s local government company. They [the tombstones] will stay there until historians and monuments protection specialists determine whether or not are there any tombstones from World War II cemeteries, waste from the factory producing concrete tombstones, or tombstones which for some reason were not used as intended.

In early Spring 2015 the scouts of the First Vilnius Scouts Team „Track” under the name of A. Małkowski of the Polish Scouting Association in Lithuania [Pl. Związek Harcerstwa Polskiego na Litwie, ZHPnL] discovered a wall made of tombstones of soldiers who died during the World War I at one of the backyards in Algirdo Street in central Vilnius. This area once belonged to the Lithuanian Railways, but now it is a property of a private company. In this part of downtown, near a bus stop, recently happen dynamic building works: the old buildings are being demolished, and there are new houses and office blocks planned to be built in their place. On the tombstones there are names of soldiers of various nationalities and religions written in Polish. The stylistics indicates that they were made during the Second Polish Republic, in pre-war Vilnius. The scouts informed the Lithuanian Department of Cultural Heritage under the Ministry of Culture and the Polish, German and Russian embassies. The local government was also interested in the matter.

Opinions are divided on the question why are there tombstones in such a place. Marian Mirzojan, the second scout leader of the Team „Track”, thinks that the wall was built in the Soviet times, and the tombstones were brought from the cemeteries destroyed during the World War II in the Vilnius region. Those cemeteries are believed to bury the World War I soldiers. On the other hand, Vitas Karčiauskas, the head of the Vilnius Department of Cultural Heritage assumes that the tombstones were made in a nearby concrete plant, but was not placed in any cemetery for unknown reasons. In the years 1926-1928 on the parish cemetery of St. Steven there really were concrete tombstones produced, however, if the discovery really is dated to this period of time, it is unlikely that they were not placed in the cemetery on the grounds of war from 1939. Therefore, it is probable that the tombstones are really waste products that were not accepted by the client because of a defect and with time they were used as building material…

Identification of the names from the tombstones is in progress. Data from the first seven tombstones given to various institutions and organisations in Poland, Germany and Russia has not given any lead yet. The Russians have found only one name in their archives – Atanacjusz Mino (Афанасий Минко) who went missing in August 1914. The fact that there is a differend time of death on each tombstone, and the fact that except for Russian and German names there also are Polish, Lithuanian and Muslim names is proof that the collection of victims are quite random. They might be for example persons who died in a military hospital or prison camp somewhere outside Vilnius region. It is probable that in the war chaos between 1918-20 the records from temporary institutions like these, which at that time beloned to German administration, were destroyed. It was only years after their graves were tidied, so it is possible that the dispersed graves were moved to some other, more spacious place. Solving the mystery will be a challenge for the historians, who need as much names and dates as possible to explain the history of the tombstones.

Before this mystery will be solved and any decision will be reached concerning the future fate of the discovered tombstones, it was decided to move them to one of the warehouses belonging to Grind’s local government company. Matzevas [Jewish tombstones] from the former Jewish cemetery in Holendernia, which were used by the Soviet authorities to create a stairway to Bouffalova mountain [Lithuanian: Pamėnkalnis,Tauro kalnas, Taurakalnis, Velnio kalnas, Vaiduoklių kalnas] have rested there for a long time.

The scouts, who have declared their will to reach the end of this matter and explain the origin of the tombstones, have volunteered to demolish the wall because the city’s authorities did not find any funds to liquidate the wall. The owner of the allotment supported the scouts in their work by giving them a helpful hand referred his workers with a car to help the youth. Until the next day all tombstones will be catalogued and transported to a protected area.