Halina Jotkiałło has passed away 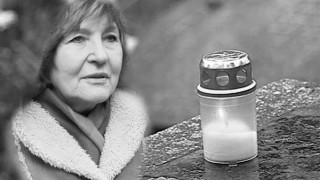 Halina Jotkiałło, Vilnian journalist, activist of Social Committee for the Care of Old Vilnius Rossa and Vilnian history expert has passed away on 27th onf April at the age of 75.

She dedicated her whole life to work in Polish media in Lithuania including newspapers Czerwony Sztandar (the Red Banner), later Kurier Wileński (the Courier of Vilnius). She also worked with “Kurier Wileński” and “Tygodnik Wileńszczyzny”.

Halina was walking encyclopedia of Old Vilnius history which wrote a lot about and shared the knowledge with fellow journalists. They could ask her about anything related to Vilnius, historical Vilnian streets or known figures.

In 1990, together with Alicja Klimaszewska, Olgierd Korzeniecki and Jerzy Surwiłła she formed a Social Committee for the Care of Old Vilnius Rossa.

Every year, on All Souls’ Day, she participated with Alicja Klimaszewska in fundrasing in Warsaw Powązki. Thanks to the committee, 80 graves has been restored in Vilnian Rossa.

She supported her husband in journalistic career, Jerzy Surwiłła who died in 2009. She was also a loving mother and grandmother of Dominik and Helena.

Halina was a really modest person, rarely having interviews. One interview from the beginning of 2014 with Halina Jotkiałło recorded in Rossa was found in Wilnoteka archives. The Social Committee for the Care of Old Vilnius Rossa was awarded then with Aleksander Gieysztor award, one of the most prestigious awards in Culture and protection of Polish national heritage.

Educational conference in Seimas: the system needs an urgent repair

Last weekend streets of Vilnius were tinged with thousands of colors of the Kaziuko Fair. This…
Kurier Wileński October 7, 2021