“Polish, get out of Lithuania” – the incident in Solneczniki 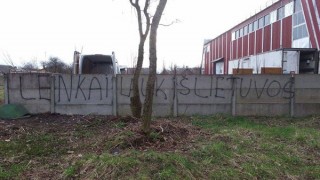 Anti-Polish inscriptions occurred in Solneczniki. Police started investigation while the local people bought colour in order to paint the inscriptions out. “Locals reacted very maturely on this provocation” – said Julia Mackiewicz during the interview with Wilnoteka, a city councillor from Liberals Movement, who spread the news about these inscriptions.

Julia Mackiewicz who is the city councillor of Local Government in Solneczniki noticed the inscription. Then, she turned to the region management, administration of justice and public figures. “I made a photo and published in on Facebook. The locals reacted in a very calm way and treated it as a provocation – she explained to Wilnoteka – Today at 4 pm we are gathering in order to paint it out”. The anti-Polish inscription “Lenkai lauk iš Lietuvos” (Polish, get out of Lithuania”) will be painted out by Polish along with Lithuanians, mainly by the teenagers from Polish and Lithuanian school, TG “Sokół” and boy scouts.

The inscriptions occurred in four places: on Niepodległości (Nepriklausomybės), Śniadeckiego (Sniadeckio) Streets and two of them were on the entrance to Solneczniki. “The incidents happened today so we can’t give you details yet” – said to Wilnoteka the representative from police in Solneczniki.

Police is looking for the offenders. The investigation was initiated according to the 2 clause of 170 article of Penal Code. According to the article, those who humiliate publicly, despise, incite to hatred or starts discrimination a group of people due to nationality, language, will be fined, arrested or imprisoned for two years.

‘Polish people are not prone to isolation, but they are also not assimilating’. Meeting in Polish Discussion Club.

In recent days, the concept of ‘discrimination’ on national grounds is extremely popular in the Lithuanian…
Znad Wilii August 22, 2018

“For a long time there has been no cooperation between our countries, I realized that I…