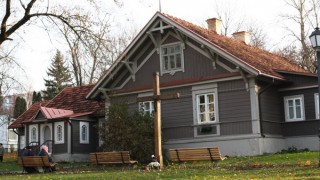 The house of st. Faustina in Vilnius, fot. wilnoteka.it

“I can’t imagine different solution. It is as simple as that. Faustina’s House ought to become the property of the Church” – said vice-mayor of Vilnius, Jarosław Kamiński, during his interview with Wilnoteka. A small house on Antokul, the last remainder of monastic buildings of The Convocation of Our Lady of Mercy will be given to the Vilnius diocese.

St. Faustina’s House will be given to the Church and will become its property. Before World War II, the building located on Antokul was held by The Convocation of Our Lady of Mercy.

“The act of passing on the House of St. Faustina is a right choice. It could not be another way round – explains the vice-mayor of Vilnius, Jarosław Kamiński, during his interview with Wilnoteka.

“Since the archbishop Gintaras Grušas became the ordinary of the archdiocese of Vilnius, our cooperation started to be more active. It isn’t a quick decision. We had been discussing it for a long time and much was about the formal aspect. Now, the details are discussed and the very act is just a matter of one meeting and handing in a few signatures.”

For the first time, Faustina came to Vilnius in February 1929. She stayed there only for four months because she was replacing a sister who was working in a kitchen. For the second time, Faustina was sent to Vilnius in 1933 when she was supposed to work in a garden. The sisters lived in the house on Senatorska 25 Street (today’s Grybo 29). The congregation hold a few modest buildings which consisted of a small church, houses for the sisters, about 90 girls and workplaces.

The house was maintained from the money from owing a bakery, a laundry for a military hospital, from a farm and a garden. In her Diary, Faustina called these buildings in Vilnius “small houses”. A new duty, which was to maitain the garden, was very demaning for her. However, it was not the duties that were the most important mission for the later to-be saint. It was in Vilnius where she met her confessor, Michał Sopoćko and here was made The Picture of Merciful Jesus. Moreover, it was in Vilnius where she heard the words of the rosary.

How did it happen that the House survived among the new buildings? Before World War II, the sisters held a house for a young girls with problems. In 1940 Soviet government made it public but the sisters with the girls could stay there. They left the house after the war and the new government made Children’s house in that place. In 1961 two big pavilions were built here while the wooden house was supposed to be destroyed. However, it turned out that the house is worth being kept. Firstly, it served as a storeroom and then as the houses for workers.

In 2005 the house started to be renovated. The left side needed the most attention because after the war, it had been burning for two times. In March 2008 Center of Pray and Pilgrimage was launched here.

A Pole has become the member of the Ethics and Procedure Commission.

“Polish, get out of Lithuania” – the incident in Solneczniki

On Tuesday, the Šalčininkai Chamber of the District Court of Vilnius Region fined actors and the…
Znad Wilii September 23, 2019