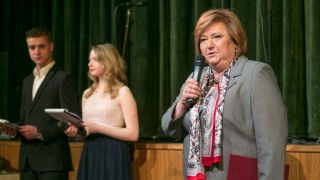 Association of Polish Schools` Teachers in Lithuania „Macierz Szkolna” (“School Mothercountry”) and Association of the School Theatre Fanciers (Towarzystwo Miłośników Teatrów Szkolnych) invited The First Lady Anna Komorowska to attend to the annual Festival of the School Theatre (Festiwal Teatrów Szkolnych) in Vilnius. It is one of the most important artistic programmes for students of Polish schools in Vilnius region. In 19th edition of this festival, 12 finalists from Polish schools of Vilnius, districts of Vilnius, Šalčininkai and Trakai will perform in the competition. Due to the meetings with EAPL politicians, Anna Komorowska will not see all of the performances but she will return to DKP at the end of the festival to present the prizes and to congratulate to the prize winners.

“I’m really glad that today I can meet you, young artists and you, who applaud them. I appreciate the fact that Festival of the School Theatre has such a long tradition here (…) In Poland we celebrate 250 years of theatre. The father of Polish theatre is Wojciech Bogusławski. I don’t know if you all know this but Wojciech Bogusławski lived and worked in Vilnius for five years. So you are, young artists, to some extent his Heirs. I’m glad that you enter this celebration of 250 years of Public theatre in our country” – said Anna Komorowska.

These performances will be presented during the first part of School Theatrical event.

Theatrical Schools are competing to win Festival of the School Theatre awards: Złoty Dzwoneczek (“Gold bell”), Srebrny Dzwoneczek (“Silver bell”), Brązowy Dzwoneczek (“Bronze bell”) and the Audience Award. The most interesting and succesful creations will also be awarded. The Jury team consist of: Anna Kietlińska, Chairman of the Association ‘Wspólnota Polska” (“The Polish Commonwealth”) – the branch in Białystok, Dariusz Szada-Borzyszkowski, theatrical and television director, Lilija Kiejzik, manager of the Polish Studio of the Theatre, and Helena Bakuło, theatrical instructor and director of władysław Syrokomla Museum in Bareikiškės.

The winners of 19th Festival of the School Theatre will be awarded by Anna Komorowska.

To use the opportunity of visit of Polish President’s wife, the authorities of three Polish schools of Vilnius: J. Lelewel High School, Sz. Konarski High School and Lazdynai High school requested for her help and intercession. These schools apply for a gymnasium status. At the end of April, the Minister of Education of the Republic of Lithuania will sign the last list of schools for accreditation. The schools not included in this list will lose a chance for secondary education curriculum.

Anna Komorowska said that she is familiar with the situation of Polish schools. “I know that the Polish embassy knows about it, Polish MP’s are working. I hope that everything will be fine” – said Polish President’s wife.

Branch of the Univeristy of Białystok successfully passed accreditation