Waldemar Dowejko: the Vilnius area does not equal only Vilnius bread and palms 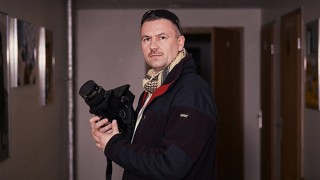 “Sometimes, wanting to preserve culture and tradition, we tend to forget about the dynamically changing present. It happens also with regard to Vilnius”, says Waldemar Dowejko. The works of this Vilnius photographer are just being presented at an exhibition in Ostróda. On the Wilnoteka website, he’s talking about the Vilnius he wanted to depict.

Ilona Lewandowska (Wilnoteka): Your first individual exhibition ”Places and People” is just being presented in Ostróda. What kind of Vilnius area did you want to show through your photos?

Waldemar Dowejko*: In a nutshell, a different one. In my photos, there are no Vilnius palms. I also wanted to avoid red and white colours, in which I was not entirely successful. What’s more, my aim was to approximate and save from oblivion the image of a Vilnius area man, so that it wouldn’t vanish in the perplexity of our times.

How would you describe a “Vilnius area man”?

There’s no universal “Vilnius area man”. That’s an umbrella term that encompasses e.g. young people who, on the one hand, do not differ from the average European, but on the other hand, are deeply attached to their Vilnius roots. We can come across such people at the festival “Polish Flowers”, as well as in everyday life in the city. I also portray the elderly. They’re not necessarily Polish, as Vilnius itself is multicultural. It would be very difficult to divide these people into specific groups: the Polish, the Lithuanians, the Jews. We all live together, and that’s what I wanted to present. I don’t know, however, to what extent I’ve achieved this goal.

You don’t take photos of Vilnius palms, you wanted to eschew showing white and red colours. Isn’t it, however, precisely what people in Poland would expect to see?

It probably is, but I wanted to break this barrier and adopt a little bit different approach. Three Crosses and the Vilnius palm can be shown differently: not as relics of the past but as symbols that bridge the gap between us, the contemporary and our tradition. People keep changing, and the youth are changing too. Nowadays, it is completely different and has a totally different approach. I don’t think the image of Vilnius may be altered by one exhibition or one meeting, but it surely can be changed through more frequent contacts.

What I find particularly important is young people. Despite such closeness of Lithuania, the Polish youth know very little about that country. With regard to my exhibition, I’ve had meetings with two groups of young people aged 16-18, and I could see how little they actually know about Lithuania. You can say they just have some basic knowledge of Lithuania as one of the EU countries. Those who have visited Vilnius, remember the Gate of Dawn and Rasos Cemetery. However, we lack contact with what this city is today, we lack contact with the Vilnius youth. Sometimes, it seems we want to preserve culture and tradition, and we tend to forget about the need to show the modern side of Vilnius.

You’re saying that Polish youth know little about Lithuania itself. How much do we know about Poles living there?

It seems we don’t have a full understanding of the specificity of Poles living in Lithuania. The older generation has a fixed view on Poles living there: it perceives them as “theirs”, but still “others”, as a kind of mixture of Poles, Lithuanians and Russians. Defining Poles that live in Lithuania as “Russians” is part of our Soviet heritage. Luckily, young people don’t do that. They perceive Poles from Lithuania as Lithuanian citizens, which is a very European way of thinking. They don’t cultivate tradition and forget about their Vilnius roots, even though their grandparents frequently come from this area. Youngsters tend to follow the West.

In one of Polish radio broadcasts, you have been introduced as a Lithuanian of the Polish origin…

That’s very logical European reasoning. “You live in Lithuania, so you are Lithuanian”. It’s good we’ve not been referred to as “Russians” anymore. In the past, it occurred quite frequently that whenever we were in Poland, people were trying to talk to us in Russian, even though we speak Polish.

Let’s come back to red and white colours for a moment. You wanted to avoid them. What made you do that, and why didn’t you succeed?

It was about eschewing a cliché*. I had strict limits on the number of pictures, as I could select just twenty. After so many years, it is difficult to choose twenty specific pictures. Why was it impossible to avoid red and white colours? Like it or not, but Lithuania is red and white too, and I hope these colours will stay there for good.

The very presence of the exhibition in Ostróda proves that Poles are still interested in the Vilnius region. How did you manage to organise it?

In Vilnius we had a meeting with Dariusz Bonisławski, vice-chancellor of the “Polish Community”, who suggested that we should organise such an exhibition as part of the Vilnius Days, which have taken place in Vilnius for the first time. The exhibition is to be presented in Olsztyn, and, finally, if we are lucky, in the main seat of the “Polish Community” Association in Warsaw. I hope that the Vilnius Days will become a tradition in Ostróda. Obviously, what I’d like to see in Poland is not only Vilnius palms, but also the artistic production of the young generation, such as music bands from Vilnius, not necessarily folk bands. The Vilnius area is not only Vilnius bread and palms.

*Waldemar Dowejko is an educationalist by profession, working as a geography teacher at J.I. Kraszewski Junior High School in Vilnius. He also works for the Polish Scouting Association in Lithuania. For many years, he’s been keen on photography, among others, report photography. He cooperates with photo agencies, and the media both in Poland and Lithuania, including Wilnoteka. His works have been presented at a few group exhibitions, recently in the Lihuanian Energy and Technology Museum in Vilnius.

“People and Places” is Waldemar Dowejko’s first individual exhibition in Ostróda. It has been organised as a result of cooperation with the Warmian-Masurian Department of the “Polish Community” Association. Unfortunately, due to spatial constraints, the author was allowed to select just twenty of his photos. His works will be exhibited in the Ostróda Town Council, and then taken to the Polish Community House for permanent exhibition.

* A cliché is a platitude or stereotype, an expression, idea or an element of artistic work used so frequently that it loses its original meaning or effect, particularly if it used to be considered new and meaningful. In mass culture this term is used for describing activities, events or ideas that are usually predictable. Some clichés are just stereotypes, others can be truisms. The term “cliché” comes from French, referring to panels used in traditional printing for high frequency words. (retrieved from: wikipedia.pl)

Translated by Julia Pastewska within the framework of a traineeship programme of the European Foundation of Human Rights, www.efhr.eu.

International Gathering of Poets of Polish descent in Vilnius