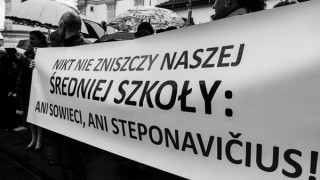 During the rally in front of the Lithuanian Minitry of Education and Sciene's building, fot. wilnoteka.lt/Bartosz Frątczak

Wł. Syrokomla High School’s community claims that the school meets all the requirements to receive a junior high school status. Local authorities from the capital share this opinion. In December, 2014, they headed a request to the Lithuanian Ministry of Education and Science that concerned an accreditation of educational programs of the high school mentioned above and several different schools from Vilnius. However, department of education lingers with the decision. On Monday afternoon, students, teachers and parents came to the ministry’s seat. They were postulating for an ‘’immediate signature of the accreditation order by the minister’’.

The organizers of the rally (Parents Forum, Board of the Wł. Syrokomla High School, Committee of the Teachers Union) wanted to demonstrate their determination in a fight for keeping the school an educational institution that teaches children from preparatory classes until their matura exam.

The school community’s anxiety is fully understandable. From the September the 1st, 2015, all of the high schools in Lithuania have to come through the process of educational program accreditation. Schools that will not manage to receive an accreditation will become either primary schools or pro-secondary schools.

The fact that the liberal conservative coalition will soon take control over the capital is another reason to have concerns. Conservatives have never hidden their negative attitude towards national minorities’ schools. And the  Remigijusa Šimašiusa’s ( who is the new Mer and a liberal as well) colleague from the party, the member of Parliament – Gintaras Steponavičius –in 2011 led to adopting the controversial act concerning the education while he was the minister of education of science. Few weeks ago, during the radio interview, Steponavičius said that “Syrokomla’’ has no chances for accreditation and if the teachers and parents want to keep the school, they should set up a private school.

In September 2014, Local authorities from the capital headed a request to the Lithuanian Ministry of Education and Science that concerned the issue of accreditation of educational programs of several Vilnian schools, including Wł. Syrokomla School. According to the fact that Syrokomla wants to realize its program that bases on Christian values, status of the school was to be changed from the budget into the public utility institution. The capital’s Council made such a decision on the 1st of April. According to Gitaraa Petronis, who is the president of Education, Culture and Sports Department, “Syrokomla” meets all the criteria required for, so called long high school and the quality of education is on a very high level there. The school however is not on the minister’s list of schools submitted for the accreditation

The protest action took place during a heavy rain. Students and members of Scout Troop and Song and Dance Group ‘’Wilenka”, which has been operating in school for almost 45 years, took the floor and spoke about the school’s achievements. They also mentioned that they would like to have an opportunity to receive their matriculation certificate in this school. The parents ensured that they are highly satisfied with quality of education and care the school provides. Stasė Vilkevičienė, mother of 11th grade student, is Lithuanian but decided to send her daughter to Polish school. As she claims now, she has never regretted her decision. ‘’My husband graduated from this school. We sent out daughter to Polish school as she has better chances for development here, including the opportunity of learning several languages. I’m very happy with our decision’’- Stasė Vilkevičienė said.

„Our scores are good starting with primary grades. In a ranking of best schools and secondary schools in Lithuania of 2014 our school won the second place. Last grades also achieve a great results: they pass their matura exams and get into universities. For many years outr school has been educating children with Christian values. We use elements of Catholic conception of education. We are prepared for the accreditation. We want to be a long secondary school with preparatory, primary, secondary and senior classes. We already have two preparatory groups,  three 1st grades and a complete set of high school graduates for the next year. Today’s rally is peaceful. We came to ask the minister for taking our school into account in the accreditation plan’’-Helena Marcinkiewicz, vice-principle of Wł. Syrokomla High School said during her talk to “Wilnoteka”

The representatives of the rally’s organizers were invited to the meeting with the officials from the Ministry of Education and Science, including the minister Genoveit Krasauskienė.

‘’We were talking to the officials that are responsible for the accreditation, we handed them a paper for the ministry Dainius Pavalkis. We were informed that in order to solve our problem, we have to find another “shareholder” – it might be bishop curia or some other organization. However, the self-government might be the only founder of the junior high school that realize program based on Christian values, as it stems for the government’s regulation. We are not trying to acquire a catholic status of the school. The ministry has its opinion and we have ours. We have to consult it with lawyers. We have two weeks for dealing with this issue, as at the beginning of May, the ministry is going to sign another list of schools ready for accreditation’’- Wiktor Łowczyk, the president of the School’s Council said during his talk to “Wilnoteka”

There are 14 schools in Vilnius waiting for the accreditation. Among them are also other Polish schools i.e. J. Lelewel High School, Sz. Konarski High School, Lazdynai High School and High Schools in Grzegorzow. Each of these schools have chosen a different way of applying for the accreditation. Sz. Konarski and Lazdynai Schools have chosen an artistic profile, J. Lelewel High School wants to realize an engineering program. Polish-Russian School in Grzegorz sn located at the suburbs of the capital so as the suburban school, it is applying for a „long” secondary school with grades from the 1st to the senior class.

As Wiktor Łowczyk said, there is no cooperation between Polish schools in the capital when it comes to the issue of accreditation. ‘’Sometimes it seems, that schools that have already gotten their status care only about themselves. However, every school that is seeking an accreditation is acting on their own. There is no coordination of activities and it is not a right direction for our education’’- W. Łowczyk said.