The new school year in Polish schools in Lithuania 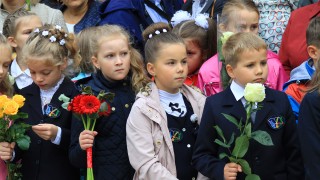 The first bell rang today for about 12,000 students of Polish schools in Vilnius, the regions of Vilnius, Salcininkai, Trakai and Švenčionys. Among them is about a thousand first graders. The number of children in Polish schools and other schools  is getting smaller. 10 years ago in Lithuania were over 100 schools with Polish as the language of instruction. Around 80 has left.

Józef Kwiatkowski, the president of the Teachers Association of Polish Schools in Lithuania “Polish Educational Society” considers the fact that since several years the number of first grades do not fall and is stable as a positive sign. The first classes in Polish schools are attended by around 1015 -1055 children, every year. “If you compare it with the best period, ie the years 1993-1994, it is twice less, but the percentage is not so tragic. At the best of times, when we had more than 2000 first graders, the proportion of first-grade pupils in Polish schools to the total first grade students in Lithuania was 3.9 percent. Currently, we have twice less students, but the percentage of first grade Polish students is 3.2 percent. 10 years ago Polish schools were attended by about 17 thousand children (3.3 per cent of total number of students in the country) , in 2013 it was less than 12 thousand students. However, the percentage is the same as 10 years ago- 3.3 percent. Obviously, this is not enough but whom can we blame for the fact that parents had left the country taking children with them and for the fact that women – and perhaps fathers – do not want to have children? “- asks Józef Kwiatkowski.

According to Józef Kwiatkowski, the decreasing number of children in Polish schools is a consequence of the demographic depression and economic migration. The president of the “Polish Educational Society” claims that the number of children from Polish families in Lithuanian schools is rather small. “You cannot hide it, this phenomenon exists, but it is not a mass phenomenon” – assures Józef Kwiatkowski.

Why parents do not trust the Polish schools? President of the Polish Educational Society  Józef Kwiatkowski believes that such parent’s decision is influenced by several factors. “First, the Lithuanian language is the state language and during the job recruitment is required – depending on the position – the appriopriate knowledge of the state language. The introduction of such a requirement had an impact on the parents decisions, because most people do not think about these categories, only knowing that such  requirements exist. Second reason is the general confusion around the Polish schools provoked by the Lithuanian media and politicians. Thirdly, there is a campaign against everything which is Polish and the technique of intimidation. This all affects the way of parents decisions who without thinking, decide of proper school for their child. They simply determine that the Lithuanian school would be a better option. Patriotism is pushed into the background by pragmatism. It applies not only to us, Poles “- claims Józef Kwiatkowski.

Józef Kwiatkowski regrets that parents do not consider or analyze what the consequences of putting their child to Lithuanian school  would be. “We have always said that a child from Polish or Russian family that comes to Lithuanian school  goes to a foreign climate, which affects his/her development, even makes it  retarded. This year, a standardized exam from Lithuanian language showed what is the situation of the child who is taught in non-native language. In many cases, students from Polish schools passed the exam better than their colleagues from Polish families who were learning in Lithuanian schools, although in Polish schools, children have been taught according to a unified program for only two years “- Józef Kwiatkowski claims  that there are many examples to confirm these words.

According to Józef Kwiatkowski, when it comes to buildings and the equipment, Polish schools positively stand out among the other schools in Lithuania. Thanks to the help of the Polish State they have a much better learning base than Lithuanian schools. In 2014  Polish schools and kindergartens in Lithuania received from Poland 1.5 million litas to be equipped with modern technical means. We have to add to it investments in renovation of buildings. The local governments also support schools.  When it comes to the teaching staff, teachers have a lot of possibilities for further education and professional development both in Lithuania and Poland.

The president of the ” Polish Educational Society ” Józef Kwiatkowski believes that the best showpiece of Polish schools are their graduates. “Many  young people who graduated Polish schools and study at the Lithuanian universities come to us for scholarship opinions. Yesterday, a graduate  from junior high school bearing the name of Pope John Paul II came here: V year of medicine, the average point grade 9.33. Our young people are studying at the prestigious universities and are doing well. Polish school students are among the best students “, – assures Józef Kwiatkowski.

“It is not possible to make a magazine for all”