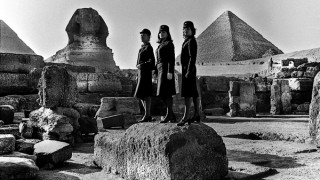 This year, LOT Polish Airlines celebrate its 85th anniversary. An exhibition of photographs commemorating special moments in the history of the company has been prepared on this occasion. This exhibition has already been exhibited in many places in Poland. It can currently be seen in the departure lounge at the airport in Vilnius.

The pictures displayed at the exhibition dedicated to the 85th anniversary of the LOT Polish Airlines illustrate such moments as the Rolling Stones arrival to Warsaw in 1967., the celebration of the 10th anniversary of LOT in 1939. and first flight to Cairo in 1963. Among the personalities seen in the photographs, we can recognize some famous people who were travelling by Polish aircraft, such as: Roman Polanski, Anna German, Irena Santor, Jan Englert, Ignacy Moscicki, Juliette Gréco and luceli Santos.

National Geographic Polska is the partner of the exhibition. ‘Today, when a photography surrounds us from all sides, it’s hard to imagine that there were times when people were taking pictures only when it was necessary. That makes old photos so unique.’ – said Wojciech Franus- the artistic director of National Geographic Polska. ‘We all know about the famous Rolling Stones concert, performance of Boney M and career of Anna German as well as a John Englert’s acting talent. However, only few realize that artists and other personalities have common history with LOT. It has been a great pleasure to discover these images, extracting the hidden charm from those old negatives‘- said Wojciech Franus.

LOT Polish Airlines are of the great importance in the history of Vilnius airport. It was the first airlines which started regular flights to Vilnius. In August 1932 was the first flight from Warsaw to Vilnius.

The exhibition consists of 30 unique photos, selected from hundreds of thousands of negatives in the archive of LOT. An exhibition dedicated to the 85th anniversary of LOT Polish Airlines can be seen at the airport in Vilnius up to 15 August.

Translated by Irmina Myśliwiec within the framework of a traineeship programme of the European Foundation of Human Rights, www.efhr.eu.