Protest in Warsaw against discrimination of Poles in Lithuania 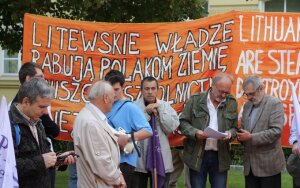 On Friday and Saturday in front of the Lithuanian Embassy in Warsaw there was another protest against lack of respect for the rights of Polish minority in Lithuania. The participants brought banners saying “Lithuanian government robs Poles of their land” and “Stop discriminating Poles in Lithuania”. There were only 20 people.

The organizers wrote a letter to the High Commissioner in the Organization for Security and Co-operation in Europe, Knut Vollebaek, asking for an intervention about changing the borders of single-member constituencies in Trakai region.

“It is a model example of electoral manipulation and it violates the Council of Europe’s Framework Convention for the Protection of National Minorities”- the document says. According to the Federation of Borderland Organisations, the Organization for Security and Co-operation in Europe’s special report on situation of Poles in Lithuania, prepared by Knut Vollebaek in June 2012 had no effect, and discriminative actions of Lithuanian Electoral Commission prove that.

The protesters called Lithuanian government to cancel educational laws that are harmful for the Polish schooling system, to give back the land that was taken from Poles during the times of USSR and to introduce a law that would allow Poles to use original spelling of their last names in passports and double names of cities in regions where Poles constitute at least 20% of all people. They also criticised Donald Tusk’s policy towards Lithuania, saying that it is ineffective. “Polish government’s policy is completely passive in relation to Lithuanian authorities. Similar neglect is also visible towards Association of Poles in Belarus and Ukraine, where the lack of support from Polish authorities caused the fall of some independent Polish media in those countries.”-told PL DELFI Mr Marek Bućko, former Polish Deputy Ambassador in Belarus. In this opinion during Lech Kaczyński’s presidency a real and significant interest in making the life of Poles in Lithuania better was visible, although even then there were obstacles on the Lithuanian side.

Any gesture towards Poland

In April 2010, a few days before the Polish Air Force Tu-154 crash in Smolensk, when Lech Kaczyński was paying a visit in Vilnius, Lithuanian Seimas rejected a bill that would allow original spelling of last names. Tadeusz Aziewicz, an MP from currently ruling in Poland Civic Platform party (PO) who is the leader of Polish-Lithuanian Parliament Group in the Polish Seym rejects those accusations. “They are unfounded, as Poland constantly supports Poles in Vilnius region as much as it can, on both, government and parliamentarian levels. We have to be aware that we are talking with authorities of an independent state and our actions must be consistent with the rules of diplomacy. The policy of Minister Radosław Sikorski is clear and his stance is all about respecting the rights of Poles in Lithuania.”- said Mr Aziewicz. He found it pointless to organize a protest in a moment when Lithuania is so close to parliamentarian elections. He also emphasized that apart from politics, other relations are also important: the cultural, civic and scientific ones, as for instance Giedroyc’s Forum that is currently being organized.

The opinion of Wojciech Borodzicz, an expert from the Centre of International Relations, is similar. “We have to go back to the roots and build relations between people, because the relations between citizens of both states and relations between politics of those states are two completely separate matters. The chance for continuation of mutual dialogue lies in greater engagement in civic actions.”- he said.

In his opinion cooperation between countries should also be based on student exchanges, promotion of Polish culture and dialogue between intellectualists and historians. “We should make up for what has not been done yet.”- says Mr Borodzicz. According to him making the situation worse makes no sense, since we already have manifestations and shouting at each other. “I’ve got an impression that Polish-Lithuanian relations have a chance for a great development. This year is a unique one, because we have had many contacts and initiatives started by civic organizations. Thanks to this, the dialogue has been maintained. On a lower, civic level, but still it remains active. Newest sociological studies show that Lithuanian society sees Poland as a friendly country. So there are perspectives for good cooperation.”-he added.

Artus Górski, the leader of Parliamentarian Assembly of the Polish and Lithuanian Seyms points out that changing the government in Vilnius may bring an improvement of Polish-Lithuanian relations. It will create a chance to go back to a dialogue. “I hope that the new Lithuanian government will understand that care and respect for Lithuanian Poles, who are rightful citizens, will be a significant step towards making the mutual relations better. I hope for a new beginning, which will lead to improvement of Polish minority’s life and to strengthening the economic cooperation between the countries. Obviously nobody expects a total change in Lithuanian politics at once, but I believe that the new authorities should make a gesture towards Poland, to show their honest willingness to solve problems. It is also worth not to repeat anti-Polish provocations that spoil the relation.”-said Górski.

PL DELFI has not managed to receive a comment from the Prime Minister’s Office or from the Organization for Security and Co-operation in Europe yet.

Day and night protest for Poles in Lithuania