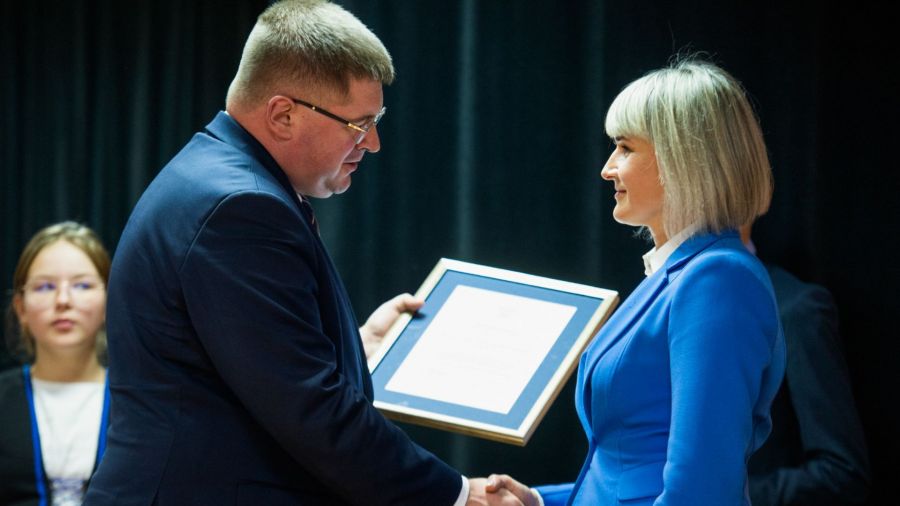 "Optimization" in the Trakai region. Students forced to terminate their contracts with the school, photo: twitter/@MEIN_GOV_PL

Shock. Bitterness. To have a beautiful school and not being able to teach there is incomprehensible – stated the headmaster of the Longin Komołowski Middle School in Połuknie Renata Krasowska.  On October 26, under the pressure of the Trakai District Municipality, the institution was forced to terminate contracts with students of eleventh and twelfth grade unilaterally.

Two months after the beginning of the school year, students of upper years are forced to look for another school. On Thursday they said goodbye to their teachers – they will continue their education in Landwarów, Vilnius or Wojdaty. Longin Komołowski Middle School in Połuknie retains its status for the time being.

As it was previously reported, on September 10, the local government removed students of eleventh and twelfth grade from the Longin Komołowski Middle School’s register of students, without the consent of their parents, due to the lack of the required number of students. Students were removed from the register despite Regulation No. V-1343 of the Minister of Education, Science and Sport of the Republic of Lithuania established on August 31, 2022, regarding “The approval of school lists for the distribution of teaching funds”. Point 3, paragraph 3.3 of the Regulation, states that “Medeinos” Middle School and the Longin Komołowski Middle School in Połuknie can implement a joint secondary education plan. Nevertheless, the local government of Trakai District decided otherwise and at the council meeting on September 6, 2022, voted to close eleventh and twelfth grades in a Polish school. Teaching of the removed students was not covered by funding. Yet, the teachers continued to educate them free of charge.

According to the headmaster, the school administration was subjected to repeated pressure from the Trakai local government. On September 21, headmaster received the first letter – it was just a letter, not an official regulation – which instructed that the removal of students from the registry shall happen the following day. She further explained to “Kurier Wileński” that in accordance with the lawyer advice, the school did not comply with the letter as it had no biding force.

The next letter came on October 7 from the director of the administration of the local government, in which the deadline for removing the students was extended by several days, until October 12.

Headmaster claimed that she could not arbitrarily remove a student from the register, as it must have been done by the student or the student’s parent. The only other option is for a student to apply to another school so that the information in the student register can change. The last letter sent, was an official regulation from the mayor, which ordered to unilaterally terminate the contracts with students until October 26th. At the same time, school was sent a pre-prepared form of notification for the student and parents, arranged in the way, which gave the impression that it was the headmaster herself notifying them about the termination of the contract and proposing to continue education at the Henryk Sienkiewicz Middle School in Landwarów or the “Medeinos” Middle School in Połuknie. Instructions were written in Lithuanian, and at the end the headmaster’s name was indicated.

The regulation of the mayor indicated that contracts with students are terminated in accordance with point 7 of the contract, excluding point 6. Point. 6 of the contract stipulates that the termination of the agreement must be agreed with other institutions, namely the Pedagogical and Psychological Counselling Centre or the Children’s Rights Service. Krasowska claims that Point 6 was omitted in order to speed up the process of closing classes. As of now, the local government’s decision of September 6 is being challenged in court. The case was deemed admissible, but the court did not apply preventive measures, so the parents appealed against the court’s decision to the Court of Appeal, asking for preventive measures to be applied. Krasowska also expressed her hope for the Court of Appeal to take all preventive measures and stop these actions.

According to the new rules for creating a network of schools, which entered into force on December 22, 2021, the total minimum number of students in grades 11–12 should be 12. These criteria were not met by the Polish-language school in Połuknie, where both grades at the beginning of the year had a total number of 10 students (a struggle with the local government resulted in three students moving to another school in mid-September), similar situation happened in nearby Lithuanian-language “Medeinos” Middle School, with only 11 students.

A small number of students in a small town is an opportunity to tighten cooperation in efforts to preserve both schools. The possibility of implementing a joint secondary education plan together with the neighbouring middle school could allow for the preservation of both educational institutions in Połuknie. This idea was also supported by the community of the Lithuanian Middle School, with the exception of the principal.

At a joint meeting of both school communities, the principal of the “Medeinos” Middle School was not able to explain why he did not want to implement the joint secondary education plan. According to assumption of Renata Krasowska he was following the orders coming from above.

The parents of the students from “Medeinos” school, which is also at risk of closing due to the insufficient number of students, wrote a letter in which they indicated that they support the idea of ​​joint teaching program between the schools. The letter was signed by 52 parents and further sent to the Department of National Minorities, Ministry of Education and Science of Lithuanian Republic, and to the Trakai District Municipality. As headmaster Krasowska says, the letter got lost somewhere in the local government, although it was sent in accordance with all the registration rules. However, this did not prevent the mayor from explaining later on FB that he did not take this letter into account, due to the fact that it did not come from the parents, but from the local community “Dienmedis” in Połuknie.

Scandalous decision of the local authorities

“The situation is scandalous” – assessed the decision of the local government authorities, MP Beata Pietkiewicz, a member of the parliamentary education committee. She emphasised that despite the fact that government regulations on the optimization of the school network have been adopted, neither the exceptions for schools of national minorities provided for in the regulation, nor the general situation of the community have been taken into account. There is a provision in the government regulation to take into account the opinion of the community. Meanwhile, the Trakai District Municipality, in consultation with the authorities, is trying to liquidate the school that could exist. This is scandalous because it affects the entire Polish community. The task of local government is to ensure that every resident can receive public services, and this is the main point in this case. We live in a lawful state. Pietkiewicz stressed that when the social interest is pitifully trampled, it must be defended in court.

According to the 2011 census, in the Trakai region, where Połuknie is located, Poles constitute approx. 30.1% of the region’s inhabitants. In the last local government elections, the ruling coalition included the Lithuanian Homeland Union – Lithuanian Christian Democrats, the Liberal Movement and the Freedom Party. These parties also jointly rule the entire country.

Translated by Anna Maria Nowak within the framework of a traineeship programme of the European Foundation of Human Rights, www.efhr.eu.

In the second half of last year, the Social Committee for the Care of the Old…
Kurier Wileński October 20, 2022