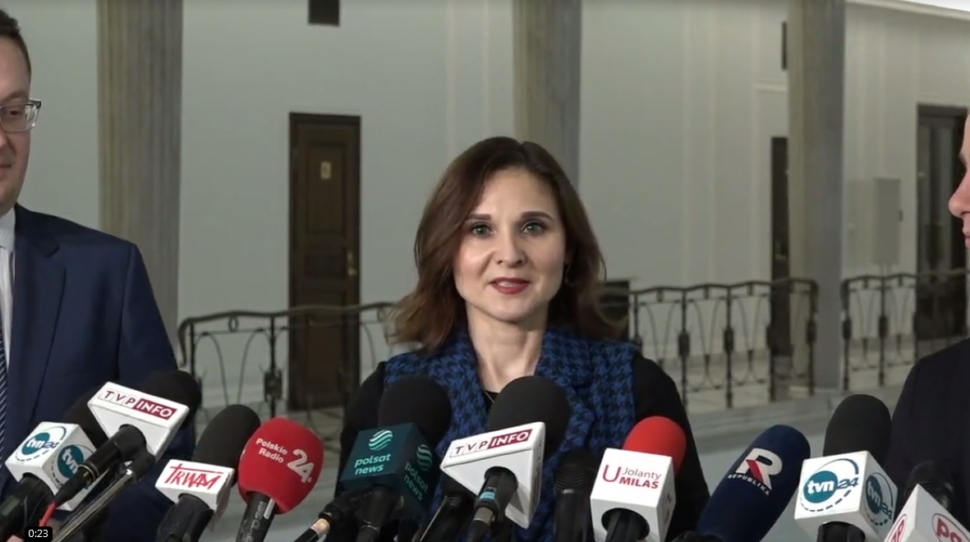 The MP of the Polish party in Lithuania, Beata Pietkiewicz, at a conference with the Confederation Party and the National Movement leaders, stressed that the main problems of Lithuanian Poles remain unsolved. “The authorities change, but Poles in Lithuania do not; they cultivate their traditions, language and try to preserve their Polishness. (…) We wish to cooperate with people from Poland and have their support because, without that, we will cease to exist.”

This week Beata Pietkiewicz, MP of Electoral Action of Poles in Lithuania—Christian Families Alliance, visited Poland. She met, i.a., with politicians of the Confederation Party—specifically with those of the National Movement.

On Wednesday, she spoke with MP Krystian Kamiński. According to his report, the discussion was “primarily about Poles in Lithuania and actions that we, as Poland, could do for them.”

On Thursday, Pietkiewicz appeared in the Polish Parliament at a joint press conference with the MPs of the Confederation Party and the leaders of the National Movement- Robert Winnicki and Krzysztof Bosak. Introducing Pietkiewicz, Winnicki noted that not only is she a representative of the Polish community in the Vilnius Region but also “one of the most involved in the fight against the system of sanitary segregation in Lithuania.”

The press conference was devoted mainly to the current situation of Poles in the Vilnius Regions. Pietkiewicz reminded that Poles from Lithuania are the only Polish community outside Poland with its own political representation in the parliament.

“Nevertheless, we still deal with our unsolved problem of national minorities,” she said. She pointed out, first of all, the lack of the bill on national minorities in Lithuania and the recently adopted bill on the original spelling of surnames. She noted that the latter issue has been resolved only partially. Pietkiewicz also said that Polish education in Lithuania “unfortunately is not experiencing the best times due to the ruling coalition’s the Millennium Schools Program.”

“I am delighted that the Confederation Party politicians are interested in the situation of Poles in Lithuania,” Pietkiewicz said. “The authorities change, but Poles in Lithuania do not; they cultivate their traditions, language, and try to preserve their Polishness.”

Krzysztof Bosak pointed out that visiting Polish Parliament by the MP of the Polish party in Lithuania is not a common occurrence and thanked MP Pietkiewicz for her presence. “We hope that our cooperation and relations will contribute to a better representation of the interests of Poles in Lithuania also in Polish Parliament. It is necessary to define the priorities of Polish foreign policy towards Lithuania correctly. Good relations with Lithuania are not possible without proper consideration of the interests and rights of Poles in the Vilnius Region. They must be properly respected by Lithuania and Polish diplomacy, which is to represent the interests of Poles.”

Bosak added that in this respect Poland could follow the example of Hungary “which actively takes care of its diaspora in neighboring counties.” He noted that contrary to what proponents of building partnerships with other countries “at the expense of representing the rights of Poles” claim, this does not have to lead to any conflicts. “A self-respecting country that wants to be respected can never forget about its compatriots, regardless of their formal status, whether they have Polish citizenship or not. Cultural and national bonds are the most important and can never be omitted in the name of some vision of international relations, which, unfortunately, has happened and we have criticized it many times,” the Confederation Party MP said. He also encouraged to visit Lithuania and take part in the annual March of Poles which takes place in May. He stressed that Polish culture in the Vilnius Region “is alive and has its own power, which leads to political self-organization.” Bosak also assured of the Confederation Party’s support for Lithuanian Poles.

Referring to Bosak’s words, Beata Pietkiewicz emphasized that such support from the Polish side is very important, and she encouraged to take an interest in the issue of Poles in Lithuania. “We wish to cooperate with people from Poland and have their support because, without that, we will cease to exist.”

MP Winnicki criticized the approach of the vast majority of the political class in Poland, which often treats the situation of Poles in Lithuania as an internal Lithuanian issue. “Taking into consideration the entire potential of the Lithuanian state, the issue of Poles in the Vilnius Region should be the key issue in bilateral relations,” he stressed. He added that Poland fulfills all international obligations in the protection and rights of national minorities, while Lithuania does not. He also noted that the recent bill regarding the spelling of surnames is not a nod to Poles, but rather to Lithuanian women who are getting married.

“We must be aware that the engagement of such people as MP Beata Pietkiewicz, or the president of the Forum for Parents of Polish Schools in Vilnius Region—Renata Cytacka (highly distinguished in the struggle for Polish education in the Vilnius Region) should be supported,” Winnicki said. He added that the Lithuanian authorities do not fulfill their obligations in Polish education in Lithuania, including the issue of taking the Polish Language Matura Exam into account when taking the university entrance exam.

In a Facebook post, Beata Pietkiewicz summed up that the essential topics discussed during the meeting with the Confederation Party politicians were: “issues of sanitary segregation, the hypocrisy of the authorities on both sides, as well as Polish issues in Lithuania from the ground up.”

“In a situation when the voice of the majority of Poles in the Vilnius Region is being silenced and ignored, it is worth looking for new allies in the political firmament, for whom the borderland policy is a much broader concept and opposite to the proposed policy of creating an ‘elite Polishness.’ We create a Polish community together, and it is we who should shape the nature of our interests as Lithuanian citizens and as a national minority based on cooperation and understanding of all the parties concerned. Being open to a sincere dialogue within the Polish community in Lithuania would be the first necessary step, but will we decide to take it?” Beata Pietkiewicz wrote.

The Poles of the Vilnius Region have achieved the first victory in the fight for their…
L24.lt April 19, 2022