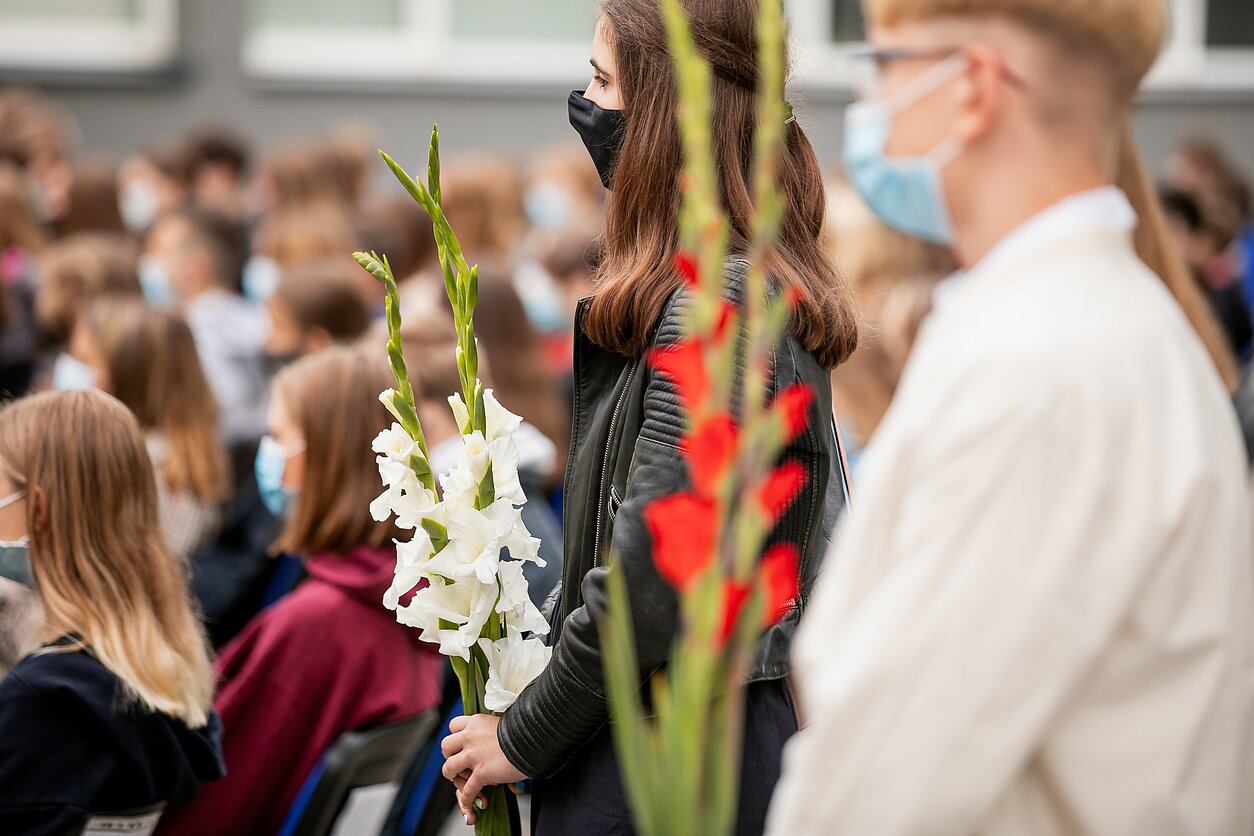 The Ministry of Education, Science and Sport (ŠMM) takes the lead in order to improve state language skills among children studying in minority schools. The initiated project, according to which pre-schoolers of national minorities will be studying Lithuanian language for 5 hours per week, will be discussed during the parliament’s autumn session.

Furthermore, ŠMM also plans to form a National Council or Commission of Minority Education in order to monitor the education of minorities and advise the minister on the formation and implementation of national minority education policy.

“The education of national minorities and its effectiveness creates a continuous and complicated issue which took more than just one day to be developed. As presented by PISA’s research, there is a huge difference between pupils from minority schools and pupils from Lithuanian schools. It is especially apparent if you take a look at the exam results of Lithuanian language” – Dr. Barbara Stankevič, the adviser of the Minister of Education, Science and Sport told ELTA.

The Minister’s adviser notes that the gap between exam results in minority and state schools has increased even more after 2011, when the Lithuanian language examination program was changed. This was exceptionally apparent in 2018 when 25.25 percent of students have failed their exams in Lithuanian. B. Stankevič stresses that even changes implemented for the minorities are not able to change anything.

“The Ministry’s human resources and strategic approach were not enough to reduce the gap”, she admits.

According to B. Stankevič, the Ministry’s goal was to improve linguistic skills among students from national minorities by upgrading teachers’ qualifications in the aforementioned schools. However, the Minister’s adviser claims that this approach was not effective.

“The results prove that this is not the group we should invest in. The majority of Lithuanian language teachers have enough qualifications, which means we should take care of creating a supportive educational environment in order to reduce the gaps between students” – said the Minister’s adviser.

The representative of the Minister of Education, Science and Sport is convinced that mediocre linguistic skills of the state language among minority students stem from the educational system and adverse socio-economic environment, in which almost half of national minority schools are located.

“As proven by the exam results, children from national minorities have interpretative and expressive skills on the same, if not higher, level as those from Lithuanian schools. This is due to the fact that they read more and operate with more than one language. Nevertheless, they are not as good with grammar and writing, which are often neglected in our program”, she noticed.

At that time, the project got stuck in the Seimas and did not reach the consideration stage. According to the representative of ŠMM, it was announced that the Parliament will finally discuss it during the autumn session.

“As for now, only one hour of Lithuanian language is provided, with parents being allowed to pay for additional classes. We are willing to integrate better with national minorities, but unfortunately, the government does not invest in this idea. Hence, we came up with this project. It has been registered in the Parliament and we hope it will be supported by political parties. This way, the first graders will develop better Lithuanian skills”, she stressed.

Stankevič is also convinced that adapted curriculum should be prepared for elementary school students of national minorities in order to develop their Lithuanian skills on a native level.

“National minorities and minority schools agree that we must strive for the same achievements in Lithuanian language; nonetheless, it is important to note that Lithuanian is not their native language and their educational environment is multilingual. Henceforth, it is necessary to include more language classes in elementary schools so that children would be able to achieve the same results”, said by B. Stankevič.

The Minister’s adviser believes that primary school students from minority schools should spend more hours on improving their grammatical and communication skills.

Plans to establish the National Council of Minority Education.

According to B. Stankevič, the National Council of Minority Education should be established in order to solve the issue of education within national minorities.

“The Ministry plants to establish the National Council or Commission of Minority Education which should be ready by September or October. Its mission would be to monitor and form experts offers in order for us to obtain evidence and arguments, independently from our localization”, she said.

The Minister’s adviser has also stressed the fact that it is planned to completely reorganize the examination system. B. Stankevič is convinced that reducing the gap in linguistic skills of children studying in national minority schools requires not only an integrated approach but also the use of positive discrimination and inclusive educational methods.

“This issue requires not only an integrated approach but also the use of positive discrimination and inclusive educational methods, at least until we overcome the differences. In terms of minority students, we need to prioritize different fields depending on their knowledge, so that we could reduce this gap throughout the next ten years”, she said.

The Deputy Mayor of Vilnius: Students of national minorities have a bigger workload

Meanwhile, the Deputy Mayor of Vilnius, Edita Tamošunaitė notes that students from national minorities are overworked as they have to learn two languages, and thus, they need to study twice as many materials. E. Tamošunaitė is also convinced that it is necessary to review education programs for minority schools and change the form of the mandatory exam in Lithuanian language.

“The current program is especially difficult and inappropriate for first graders from Polish and Russian environments, for whom Lithuanian is not a native language. All of their classes are being held in either Polish or Russian, and while Lithuanian is indeed one of their subjects, it has less hours than in Lithuanian schools. Hence, it is mandatory to review studying programs as they are harmonized from the fifth grade upward – despite the fact that students of the grades 1-4 (national minorities – ELTA) have 50 percent less classes”, explained E. Tamošunaitė for ELTA.

The Deputy Mayor also stresses that the current studying programs of Lithuanian language provide children of national minorities with the knowledge about literature instead of correct grammar. According to E. Tamošunaitė, children from minority schools are obligated to read two times more literary works than children from ordinary schools.

“I want every citizen of Lithuania to develop excellent skills in our native language in terms of communication and correct grammar, however, our current teaching program focuses on literary knowledge. A child growing up in a minority school must be acknowledged with their native language as well, and thus, such child has twice as much work to do”, stressed the Deputy Mayor of the capital.

Tamošunaitė is convinced that the final Lithuanian language exam, which focuses on writing literary or theoretical essays, does not showcase actual knowledge. She claims that graduates of national minorities schools should be allowed to choose between two types of exams, depending on which university major they would like to attend.

“It is possible to introduce different types of exams for students who want to study humanistic subjects in Lithuanian and one for those who prefer mathematics and technical subjects”, said E. Tamošunaitė.

The Deputy Mayor of Vilnius notes that children of minority schools are overworked due to the fact that they study both their native and the state language. E. Tamošunaitė stresses that children from national minorities, in order to pass the exam and enrol in university, are forced to study Lithuanian after school and pay for these additional classes.

Jovaiša: Lithuanian language exam must be the same for both Lithuanians and national minorities

The chairman of the Commission of Education and Science, Eugenijus Jovaiša, admits that children from national minorities have very poor command of Lithuanian language as they begin their education.

“It needs to be understood that there are many children speaking in foreign languages who begin their education with either little or no knowledge of Lithuanian. Unfortunately, this is how our reality looks like”, said E. Jovaiša for ELTA.

In the chairman’s opinion, it is possible to adjust the Lithuanian language curriculum especially for children studying in minority schools. Nevertheless, E. Jovaiša is convinced that the final exam’s form should remain the same for every citizen of Lithuania – including national minorities.

“Poles, who live among us, would like to have a separate curriculum, and I understand that because there are some certain issues. On the other hand, we agree with our Polish representatives that Lithuanian language exam in the twelfth grade should remain the same for everyone, without any discounts for less knowledge, ignoring mistakes, etc.”, explained the politician.

“We are all aware of the fact that citizens of Lithuania need to integrate with Lithuanian lifestyle for their own advantage. Any idea is good, so I do not see any problem with adjusting the program and textbooks, as long as children manage to carry on with a regular Lithuanian language textbook later”, he added.

Jovaiša stresses that people speaking a foreign language need to integrate into Lithuanian life. He believes that children from minority schools should know not only Lithuanian grammar but also its obligatory literature.

“Lithuanians are obligated to have the same knowledge. So, what exactly is the problem if they want to have a broader program? We encourage you to study both Polish and Lithuanian literature, as it is a mandatory element of our lives”, he said.

The member of Seimas states that in order to solve the issue of minority education, one should contact specialists who will manage the adjustment of Lithuanian textbooks for elementary schools. Nevertheless, E. Jovaiša admits that he has never discussed this issue in the Commission of Education and Science.

“Our commission has yet to discuss this issue. Now is the pre-election period, so I doubt that anyone will raise this issue”, said E. Jovaiša.

Translated by Aleksandra Sokół & Justyna Verik within the framework of a traineeship programme of the European Foundation of Human Rights, www.efhr.eu.

Discussions: “How can the elections influence Lithuanian Poles?” – speeches about surnames and tips about blackmail

A longtime problem of Lithuanian Poles left in Nausėda’s hands: What will the president do?